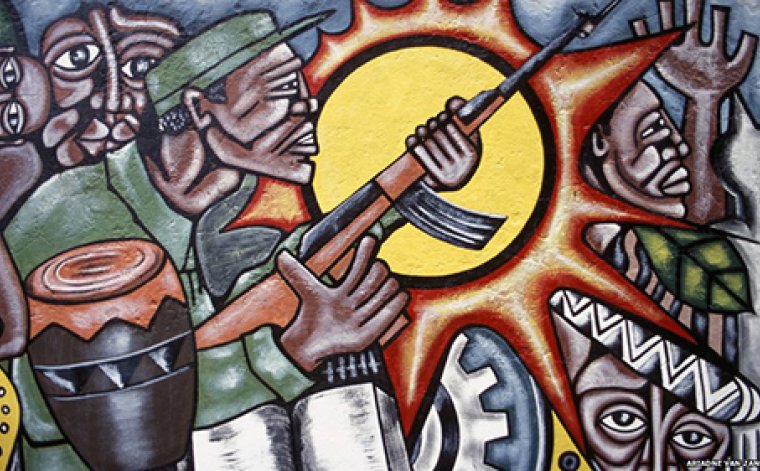 [This article is interesting as it highlights the challenges that African countries face in regard to their independence and development in the modern era as well as the role of Russia in organizing a world order that is not dominated by US imperialism. First of all, countries such as Mozambique face violence from armed opposition groups such as RENAMO and other extremist paramilitary groups that are aligned with imperialism. Secondly, they suffer from large-scale corruption and serious economic hardship that hinders their development. In order to fund development projects, African countries must take out loans from other countries such as China, but they risk losing ownership of such development projects if they are unable to pay back these loans, a likely possibility considering their existing economic problems. Thus, African countries find themselves stuck between competing economic powers such as the US, China, and others who, while promising development, are keen to gain control of Africa’s vast resources. Russia’s current major geopolitical project is to organize and lead the “multipolar world,” a world order based upon national sovereignty and independence from the US empire; the success of this project depends upon a delicate balancing act of national and strategic interests. African countries would benefit greatly from the successful organization of such a world order which could open up possibilities for socialist construction. —Medved]

Russia’s strategic reengagement with Mozambique will strengthen multipolarity in Africa by providing a much-needed alternative to the US and China.

The recently concluded Saint Petersburg International Economic Forum (SPIEF) saw the signing of many major deals with large countries and companies, but it was the lesser-discussed ones with comparatively smaller states that might actually be the real game-changers. During his trip to President Putin’s hometown, Mozambican Foreign Minister Jose Pacheco declared his country’s willingness to boost cooperation with Russia to the point of making Moscow a “strategic partner in different fields”, which includes the military realm as per the two side’s 2015 agreement for a five-year renewable partnership in this field and also the energy one when it comes to clinching gas agreements with Rosneft by yearend.

Russia can greatly assist Mozambique in both of these fields because the Southeast African state has suddenly fallen victim to Islamic terrorism in its northern region that most recently saw the beheading of at least 10 people, which coincidentally or not just so happens to be right where enormous offshore gas deposits were found in the Rovuma Basin. This geographically expansive but moderately populated nation of 30 million is strategically positioned between regional leader South Africa and the promising East African Community of Tanzania, Burundi, Rwanda, Uganda, Kenya, and new member South Sudan which plans to integrate into a political federation sometime in the future, thus making Mozambique the irreplaceable transit state between them.

For some background reading about the country’s geostrategic significance, the reader should reference the author’s two previously published pieces about Mozambique:

* “There’s More Than Meets The Eye To Mozambique”

The main idea is that Mozambique’s pivotal location and copious offshore energy resources enable it to power BRICS member South Africa for years to come through the planned African Renaissance Pipeline, while its coastal position provides the neighboring landlocked states of Malawi, Zambia, and Zimbabwe – as well as nearby Botswana – with access to the sea via the Nacala Development Corridor and Ponta Techobanine Railway projects, all of which could be invested in by China as part of its One Belt One Road global vision of New Silk Road connectivity. Unfortunately, the country is also plagued by off-and-on violence by the Cold War-era RENAMO opposition group’s armed members that makes actualizing this vision very difficult at the moment.

In addition, another major stumbling block is that Mozambique is practically broke right now after a recent scandal unearthed massive corruption surrounding secret loans from unnamed parties, thus making Maputo incapable of funding this multipolar vision without outside help. China could of course come in and “save the day”, but with Mozambique unable to realistically pay back any loans that might be offered, the most foreseeable result would be that Beijing would eventually take full ownership of these projects like it did with the Hambantota port in Sri Lanka for the very same reasons, an outcome that the US would surely object to and do its best to clandestinely offset via the aforementioned Hybrid War tools of Islamic terrorism and RENAMO.

Being caught between the US and China could be enviable if a given country is able to effectively “balance” between these Great Powers and extract the best benefits, but in order to do that, the state itself must be strong enough that it doesn’t get taken advantage of by one or both of them, ergo the interest in seeking Russian assistance just like the Central African Republic recently did. The unexpected introduction of a third party like Russia as a strategic partner for any country – and especially African ones – is meant to boost the host nation’s prospects of “balancing” between the US and China in the New Cold War by shaking up the state of affairs, which fully accords with Russia’s grand strategy as explained in the author’s previous analyses:

* “Why Does Russia Want To Sell Arms To The Central African Republic?”

In short, Russia is pursuing a variety of non-traditional partnerships all across the world and particularly in the “Global South” with the intent of positioning itself as the multipolar leader of a new Non-Aligned Movement (Neo-NAM) for countries who want to strike a “balance” between the US and China, though it’s being challenged in this regards by India which seeks to become the unipolar-friendly leader of this very same “bloc”. Although Russia and India are engaged in a “friendly competition” with one another in unofficially leading the Neo-NAM, these historical partners are also likely to cooperate from time to time in third countries out of the strategic self-interest that they have in doing so like was elaborated upon in two of the author’s most relevant pieces:

* “India Could Cordially Compete With China Through BRICS+”

India has its eyes set on “containing” Chinese influence in East Africa through its joint “Asia-Africa Growth Corridor” (AAGC) series of megaprojects with Japan that could possibly be of interest to Mozambique, and it also envisions building a prospective military base in the nearby Seychelles islands as its first step of expansion in the continent. Russia, meanwhile, has a military agreement with India’s close regional partner of eSwatini (formerly Swaziland) nestled between Mozambique and South Africa and from which the two Great Powers could engage in trust-building exercises prior to expanding their strategic coordination throughout the rest of East Africa via Moscow’s potential involvement in the AAGC.

Russia already enjoys excellent relations with Egypt and Sudan in North Africa, the Central African Republic in Central Africa (which could serve as a gateway to the Democratic Republic of the Congo), Ethiopia in East Africa, and South Africa and now Mozambique in South-Southeast Africa, which collectively constitutes an unannounced “African Pivot” that’s strengthened through Maputo’s inclusion because of its energy and commercial transit significance in linking BRICS’ southernmost member with the East African Community. A Russian-stabilized Mozambique could become the pivotal piece of Africa’s developing multipolar framework, though provided that Moscow’s military aid succeeds in protecting it from the new threat of Islamic terrorism and can then be leveraged in a diplomatic dimension to sustain peace between the ruling FRELIMO party and RENAMO armed oppositionists.

In pursuit of this, Russia has no qualms about cooperating with both China and India in spite of their American-provoked rivalry because the essence of Moscow’s grand strategy is to become the crucial third “balancing” force for nations to turn to in seeking a “pressure valve” from any Great Power competition, whether between China and America or China and the US’ Indian proxy. The priceless experience that Russia will gain throughout the course of its dual stabilization-“balancing” mission in Mozambique will enable Moscow to emerge as the undisputed leader of the Neo-NAM if it succeeds with bringing tangible benefits to Maputo just like it seeks to do with Bangui, which will altogether strengthen multipolarity in Africa and give its many countries the credible third partner that they need to become truly independent.