[It is deplorable that slavery still exists in the 21st century, no less in a country that once offered the highest standard of living to its people under the heroic leadership of Colonel Muammar Qaddafi. Furthermore, this slavery is inextricably linked to western imperialism in the region, for a centralised Libyan government under Qaddafi would have been able to repress these opportunistic slave gangs had the latter not been supported by the UN and NATO in overthrowing him. Slavery is most prolific in the regions controlled under UN occupation; we are outraged at the heinous crimes committed against black refugees and migrants in Libya, and for the Libyan people as a whole who suffer for the sake of imperialism. -Dylano Williams]

Libya’s UN-backed government says it is investigating allegations that hundreds of African refugees and migrants passing through Libya are being bought and sold in modern-day slave markets.

According to reports, the trade works by preying on the tens of thousands of vulnerable people who risk everything to get to Libya’s coast and then across the Mediterranean into Europe – a route that’s been described as the deadliest route on earth.

Libya is the main gateway for people attempting to reach Europe by sea, with more than 150,000 people making the crossing in each of the past three years.
“They [the refugees] are from several African countries and they say they have fled war, poverty and unemployment in their countries … They have taken a tough journey through the desert and they have paid people smugglers to get to Libya to try to cross the Mediterranean to Europe. With the security and financial collapse in Libya, human trafficking and smuggling have become a booming trade,” says Mahmoud Abdelwahed, reporting from a detention centre in the Libyan capital Tripoli.

There is no proper registration process for the tens of thousands of refugees arriving in Libya.

According to reports, the business of detention centres is unsupervised in some parts of Libya and stories of torture, rape and forced labour have emerged.

When the centres get too crowded, people are then allegedly sold off like goods in an open market. Survivors have told the UN’s migration agency that they use smartphones to connect with people smugglers to get them to Libya’s coast, and that they were then sold, being held for ransom, used as forced labour or for sexual exploitation.

The International Organization for Migration says trade in humans has become so normalised that people are being bought and sold in public for as little as $400.

“As shocking as it seems, it’s indeed true,” Leonard Doyle from the International Organization for Migration tells Counting the Cost. “The reason it [slave trade] can happen is because there is really no rule of law across much of Libya. Libya is a country as big as France, with a lot of space there. Migrants are coming there … they see the promise of a new life when they go to their Facebook feed and they think something wonderful is waiting for them in Europe, because a smuggler has abused the system and has sold them that lie.”

He explains that when they arrive in Libya, “they get off the bus and they are quickly put into a kind of murder machine, an extortion machine. They are robbed of their possessions, their families are called. They are forced, they are tortured, they give them money. And then they are sold. Unbelievable, but they are sold in open, public auctions: $400 for a labouring man, maybe a bit more for a woman who can be put in the sex trade. And this is what’s happening across the country.”

Doyle stresses that this issue shows that the international community should pay more attention to post-Gaddafi Libya.

“There is an international responsibility to help … What is particularly important now is that this issue is reaching global attention,” says Doyle.

“Modern-day slavery is widespread around the world and Libya is by no means unique. It’s happening in the developed countries of the world as well as the undeveloped countries. But what’s particularly shocking is that this is happening effectively in the open, where people can go to a farmhouse, place a bid and end up ‘owning’ a human being.”

LLCO Ghana comrades and United Front allies demonstrate for justice and against slavery in post-Qaddafi Libya: 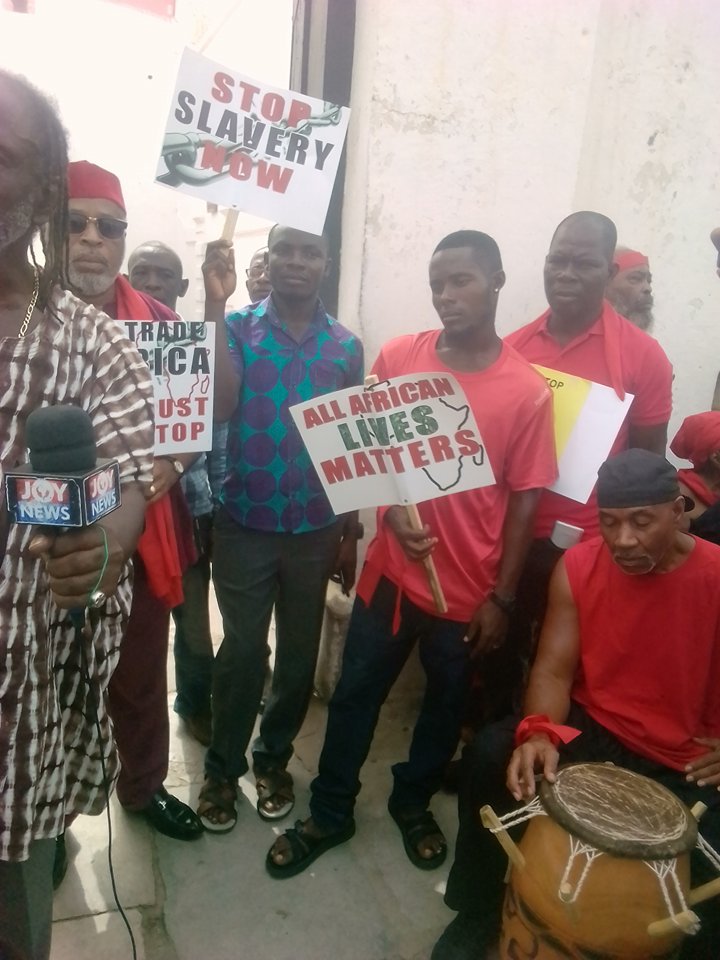