[Capitalism is irrational from the standpoint of balancing ecological and human needs. Instead, communities are not planned in harmony with the natural world nor are poor communities protected from such disasters. This irrationality is part of what Karl Marx called the anarchy of the capitalist mode of production. The reason that poor people lose their lives in such disasters is because capitalism does not value them enough to create the proper infrastructure to prevent such problems. The reality is that such disasters are the result of hundreds of years of neglect inflicted by the wealthy, the feudalists, the capitalists, the imperialists, the First World, against the proletarian and the poor classes, against the Third World. The reality is that natural disasters are as much man-made as natural. Such disasters are yet another crime by the rich against the poor. The reformists, global institutions, the reactionary state, the capitalists refuse to place the blame on capitalism itself. Instead they repeat the same old lies. They say that the system can be fixed. The reality is that they will never fix their system because they are the system. The nature of capitalism is to serve the wealthy, not the poor. From their point of view, from the standpoint of the wealthy, capitalism is working fine even if poor peoples are slaughtered. — Leading Light] 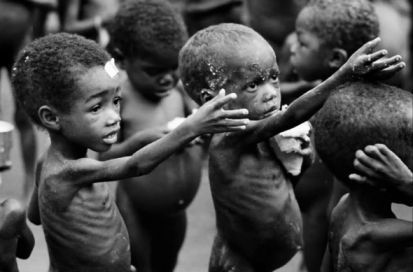 NAIROBI, Kenya — Global warming may have contributed to low rain levels in Somalia in 2011 where tens of thousands died in a famine, research by British climate scientists suggests.

Scientists with Britain’s weather service studied weather patterns in East Africa in 2010 and 2011 and found that yearly precipitation known as the short rains failed in late 2010 because of the natural effects of the weather pattern La Nina.

But the lack of the long rains in early 2011 was an effect of “the systematic warming due to influence on greenhouse gas concentrations,” said Peter Stott of Britain’s Met Office, speaking to The Associated Press in a phone interview.

The British government estimates that between 50,000 and 100,000 people died from the famine. But the new research doesn’t mean global warming directly caused those deaths.

Ethiopia and Kenya were also affected by the lack of rains in 2011, but aid agencies were able to work more easily in those countries than in war-ravaged Somalia, where the al-Qaida-linked Islamic extremist group al-Shabab refused to allow food aid into the wide areas under its control.

The peer reviewed study will appear in Geophysical Research Letters, a journal of the American Geophysical Union.

“In the coming decades, unless urgent action is taken to slash greenhouse gas emissions, temperatures in East Africa will continue to rise and rainfall patterns will change. This will create major problems for food production and availability,” Gebregziabher said.

Stott said that the evidence is “very strong” that the planet is warming due to an increase in greenhouse gases. He noted that the study indicates that both natural causes — La Nina and the short rains — and man-made causes contributed to Somalia’s drought.

The Met Office’s computer modeling study found that between 24 percent and 99 percent of the cause of the failure of the 2011 rains can be attributed to the presence of man-made greenhouse gases, Stott said.

Global warming is caused by the burning of fossil fuels — coal, oil and natural gas — which sends heat-trapping gases, such as carbon dioxide, into the air, changing the climate, scientists say.

Ahmed Awale works for the non-profit group Candlelight, which is dedicated to improving conservation and the environment. He believes Somalia’s climate has been changing for many decades, with rainfall patterns becoming more erratic.

“If you miss one of the two rainy seasons we have a very severe drought. The other indicator is that there is a rise in temperature,” he said, adding later: “This all negatively impacts the livelihood of the people. Most of Somalis depend mostly on pastoral production.”