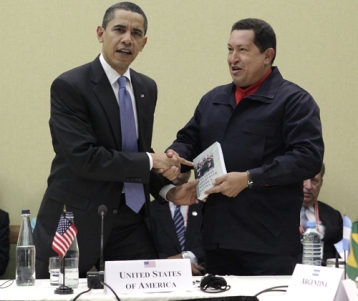 [We have long maintained that the regime in Venezuela is not truly a socialist one. Rather it is a regime of the patriotic bourgeoisie that has played a progressive and anti-imperial role. What this means in the case of Venezuela is that it is a regime that aims at national development and social democracy, but it does not aim for nor is it headed for communism. It is not led by the proletariat, the proletarian line of the most advanced revolutionary science of Leading Light Communism. Despite its occasional socialist sounding rhetoric, the regime is one that advances limited progressive goals that fall within the space of the leftwing of the patriotic bourgeoisie. Chavez’s recent comments that Obama is a “good guy” that should be voted for underscore the nature of the regime there. Such comments, even if they are for show, demonstrate a huge disconnect between Chavez and the needs of the international proletariat. The international proletariat needs to hear the very clear message that the United States, the First World, and Obama are enemies. The true leaders of the international proletariat do not make such opportunist comments to curry favor with the imperialists. Obama represents the system and all its horrors. We must not lie to the proletariat. The system is a total failure. The United States, and the First World generally, are enemies of humanity. The system cannot be reformed through elections. It must be destroyed through global people’s war led by the highest revolutionary science, by the Leading Light. Despite his attempts to appeal to Obama and the United States, the Chavez regime should be supported against imperialism. The Leading Light Communist line is to extend critical support to all those who resist imperialism. — NP]

“If I were American, I’d vote for Obama,” Chavez said in a televised interview that aired Sunday.

The Venezuelan leader called Obama “a good guy” and said if the U.S. president were a Venezuelan, “I think … he’d vote for Chavez.”

Chavez is running for re-election, seeking another six years in office in an Oct. 7 vote. Obama faces Republican Mitt Romney in his November re-election bid.

Venezuela has had tense relations with the U.S. government for years, even though the United States remains the top buyer of oil from the country.

“I wish we could begin a new period of normal relations with the government of the United States,” Chavez said in the interview on the Venezuelan television channel Televen.

Chavez and Obama shook hands at a 2009 summit, but relations have since cooled.

The U.S. Embassy in Caracas has been without an ambassador since July 2010, with Chavez rejecting Washington’s nominee for ambassador, Larry Palmer, and accusing him of making disrespectful remarks about Venezuela’s government. That led Washington to revoke the visa of the Venezuelan ambassador to the U.S.