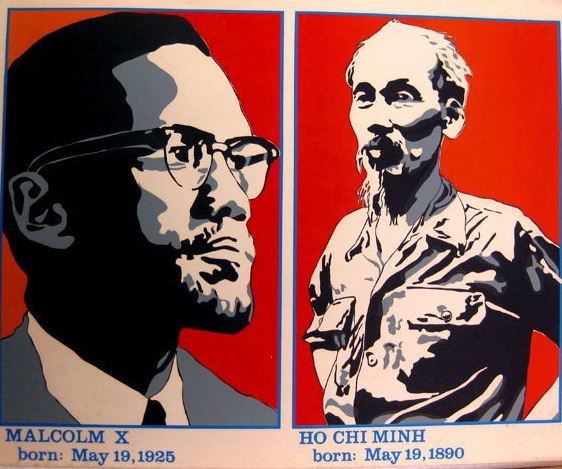 Today, May 19th, we celebrate the lives of two heroes of the anti-imperialist struggle. We celebrate the birth of Malcolm X, one of the greatest leaders of the Black liberation struggle against the United States. Although not a communist, Malcolm X was an important freedom fighter who stood with oppressed peoples everywhere in their struggle against imperialism. His life was tragically cut short by an assassin’s bullet. His words, his example, inspired and continues to inspire the Black liberation movement to this day. He was an important figure in the development of later movements, including the Black Panther Party in the 1960s.

Today is also the birth day of Ho Chi Minh, “Uncle Ho.” Ho Chi Minh was the communist leader of the Vietnamese communist and anti-imperialist struggle. His struggle inspired the whole world. Che Guevara, the great Latin American internationalist and communist, pointed to the importance of the Vietnamese struggle as an example for the whole world when he called for “two, three, many Vietnamese.” Lin Biao, the great Chinese communist, also pointed to their heroic struggle. People everywhere saw how the people power of the Vietnamese overcame the technological terror and financial might of the United States as the imperialists waged their unsuccessful genocide against the people of Indochina. Their victory against imperialism reminded humanity that the dawn follows even the darkest night, as Ho Chi Minh reminds that “after sorrow comes joy”:

Everything changes, the wheel of the law turns without pause.
After the rain, good weather.
In the wink of an eye
The universe throws off its muddy cloths.
For ten thousand miles the landscape
Spreads out like a beautiful brocade.
Gentle sunshine. Light breezes. Smiling flowers,
Hang in the trees, amongst the sparkling leaves, All the birds sing at once.
Men and animals rise up reborn.
What could be more natural?
After sorrow comes joy.

Great days are ahead of us, comrades. We are a movement of heroes. Our journey is long and hard, but with each day, we accomplish small victories. Do not let the flies bother us. Keep marching. The future is ours. Long live the Leading Light!