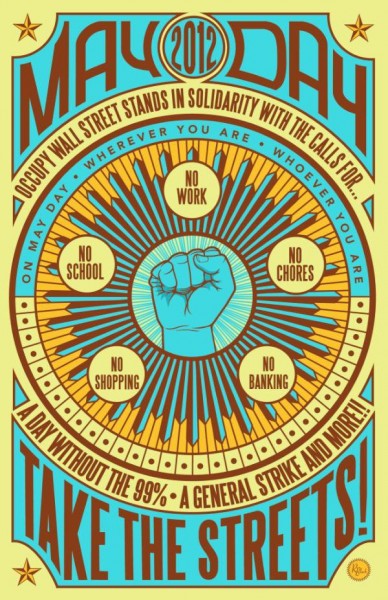 On May Day and Occupy in the USA

On the first of May, many people celebrate International Workers’ Day or May Day. Even though the day has not always been widely celebrated in the United States, its origins trace back to labor struggles there. May Day commemorates the victims of the Haymarket Massacre in Chicago in 1886. During a general strike by workers in Chicago, USA in 1886, a bomb was thrown by an unknown person. In response, the police fired into the crowd killing many workers. Also, many police died from friendly fire. At the first congress of the Second International in 1889, Raymond Lavigne, called for international demonstrations on the 1890 anniversary of the Chicago protests. In 1891, at the second congress of the Second International, May Day was formally recognized. Later, there were May Day riots in 1894. And in 1904, the International Socialist Conference in Amsterdam called for demonstrations to be held on May Day by social democratic and trade unions to establish the eight hour workday. May Day has since become celebrated in many countries around the world, sometimes as an official holiday. In the old socialist regimes, May Day was often one of their biggest holidays.

In the United States, May Day celebrations have diminished. The official holiday for workers is Labor Day, which is observed on the first Monday in September. Labor Day was established, in part, as an alternative to the radical May Day. Labor Day was promoted by more mainstream, reformist organizations like the Central Labor Union and Knights of Labor. Thus President Grover Cleveland moved the workers’ holiday to the Labor Day celebrated by the more reformist organizations in 1887. Fascist and reactionary states have often worked to eliminate or repress May Day. Even though the state actively worked to draw attention away from May Day, the main reason for the lack of strong May Day demonstrations in the United States can be traced to changes in global class structure. With the rise of US imperialism, the standard of living of workers in the United States increased. More and more concessions were won through reformist struggles. The economic burden was shifted onto Third World peoples. Social peace was won in the First World by increased exploitation and oppression of the Third World. Thus workers in the United States had less and less need of a May Day as workers in the First World became bourgeoisified. May Day became a holiday mostly for insignificant leftist sects and nostalgists. However, in the last decade, May Day has been revived due to protests by migrants in the United States against racism. Even so, May Day protests have been diminishing. The Occupy movement is seeking to revive May Day this year. Although, such a revival can be used by Leading Lights to educate and organize, the premises of the Occupy effort are deeply flawed. The revival of May Day is an honorable goal, however, Occupy profoundly misunderstand the balance of forces globally. A populist attempt to revive May Day, at best, will only gather support from the usual communities of activists and their allies. There may be some spectacles in a few major cities, but the kind of mass outpouring that Occupy expects will not happen. A real general strike will not happen. The general public in the United States simply does not want revolution nor is it in their interest to make real socialist, communist revolution. The conditions for real revolution do not exist in the First World, especially in the United States. The workers here do not have a class interest in uniting with the proletariat in the Third World. Workers in the First World have far more in common with their own overlords than they do with workers, peasants and lumpen in the Third World. Contrary to Occupy’s populist rhetoric, the reality is that most First World peoples are part of the metaphoric global 1 percent, not the global 99 percent. Populist movements in the First World tend to stroke up fascism and social imperialism, not proletarian internationalism. However, such movements will exist whether or not Leading Light participates. At least by participating, Leading Light has some ability to influence some attendees to break left toward internationalism, anti-imperialism, and communism instead of breaking right toward economism, chauvinism, populism, and fascism. Establish a pole for global equality, anti-imperialism and decolonization, revolutionary environmentalism, and Leading Light Communism this May Day. Criticize economism, populism, chauvinism, imperialism and social imperialism, fascism, and First Worldism generally. Participate. Educate. Lead.