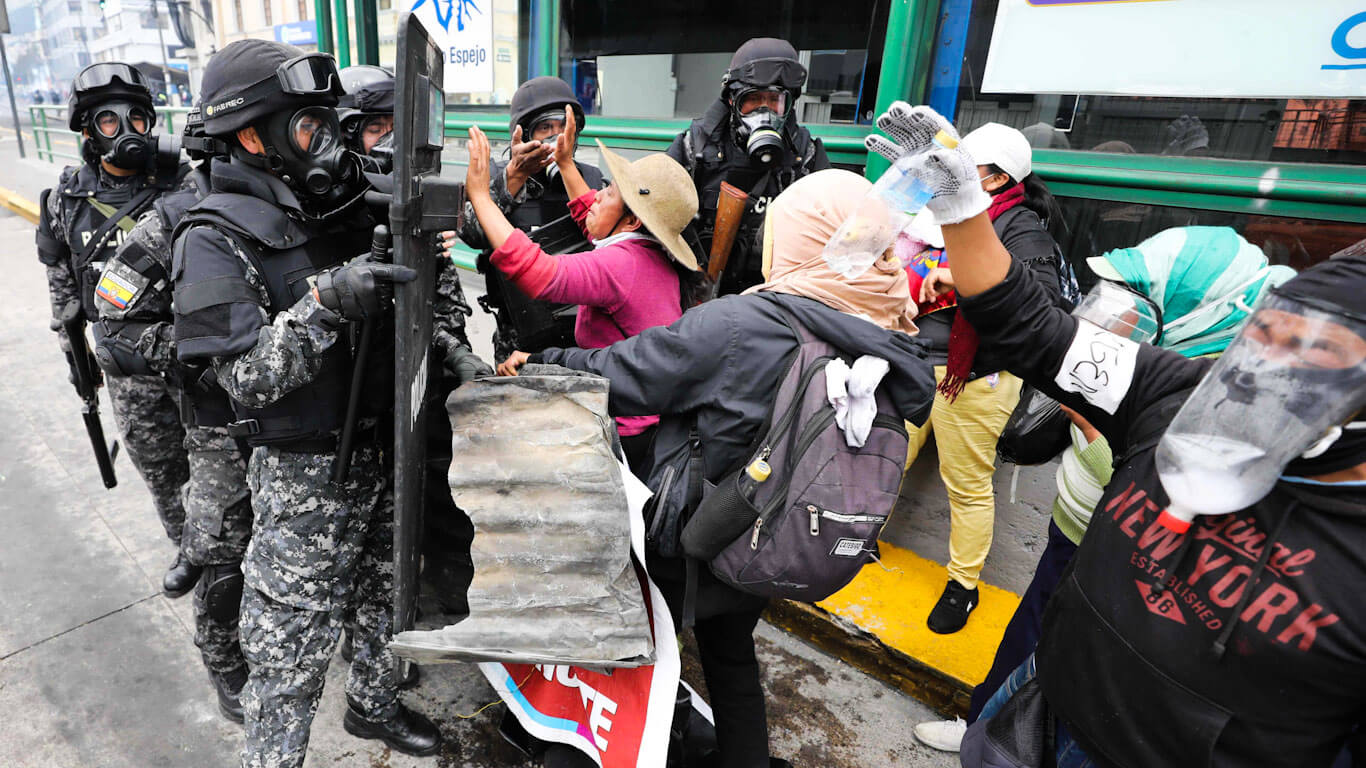 [Indigenous groups in Ecuador are currently staging large-scale protests against harsh austerity measures that are being implemented by the ruling Moreno government as part of a $4.2 billion IMF loan deal. These austerity measures include massive hikes in fuel prices, causing the cost of food and transportation to rise sharply. Protesters have faced harsh repression from police, and as many five people have died, including an indigenous leader. When Lenin Moreno was elected, he claimed to be a socialist. However, his actions have proven that he is a wolf in sheep’s clothing. In reality, Moreno is nothing more than a puppet of US foreign policy, an agent of imperialism whose actual agenda is to hand over control of Ecuador’s economy and oil wealth to the US capitalist class. In order to eliminate such unnecessary poverty and exploitation at the hands of the capitalists, it is necessary for poor and working-class people in Ecuador and across the world to unite under the banner of anti-imperialism and Leading Light communism to smash the imperialist bourgeoisie and the global capitalist system once and for all. —Medved]

QUITO, ECUADOR — “We don’t have a state! We don’t have any state!” The lady’s voice projects through a loudspeaker amid the crowd. She’s not having it. Nor is the groundswell of hundreds, if not thousands who’ve converged at Plaza Grande trolley stop, just meters from Simon Bolivar’s statue at the entrance to Quito’s historic center. They’ve come to express their disquiet over a fresh round of austerity measures declared by Ecuadorian President Lenin Moreno last week, the backbreaker being the now-infamous fuel subsidy cut, as part of a $4.2 billion International Monetary Fund (IMF) loan package.

“Diesel rose from $1.03 to $2.30 per gallon on Thursday [Oct. 3], while gasoline rose from $1.85 to $2.39,” according to Reuters, which cited the government’s own figures. Transport and food prices also skyrocketed. Other economic reforms affecting public-sector workers included cuts to wages by 20 percent, annual vacation time slashed in half, and a mandatory days-wage paid to state coffers each month.

Unable to bear the outlays, people amassed on the streets.

Twenty-four hours later — faced with nationwide, indigenous-led protests, and under the aegis of maintaining order (certainly not fuel subsidies) — Moreno declared a state of emergency. A few more hours would go by before he transferred the seat of government from the capital city of Quito to Guayaquil. Asked why he had abandoned Quito, Moreno told the BBC, “because, in the end, most of them [protesters] were coming after me.”

“We don’t have a president!”

Yesterday, the Latin American Geopolitical Strategic Center (CELAG) released a report showing that approximately two percent of Ecuador’s total population, approximately 300,000 people, will descend into penury as a result of the austerity. In response to the measures, Mesias Tatamuez, director of the Workers’ United Front union, said the government had succumbed to “rewarding the big banks, the capitalists, and punishing poor Ecuadorians.” Such sentiments are echoed by many protesters, including our lady grasping her loudspeaker mic:

Simon Bolivar’s statue, located near Banco Central and one of the four corners of Parque Ejido, represents a strategic partition in Quito. It serves as a divisor between the road leading to the affluent north — perched comfortably in the region comprising Parque Carolina, Shyris Avenue, and Quicentro Shopping Mall — from the road leading to the working-class and poor centro and southern communities. Exposed from without, Quito’s northern epicenter, woefully detached from working-class struggles, finds itself socially alienated from within.

It began with a burning

Yet, the notion of class consciousness is not necessarily a cut and dry issue.

On Tuesday, the sixth day of protests, I caught a ride with eight other people in the back of an old pick-up truck near centro. Heading north for food supplies, an older man of European descent hustled his way onto the vehicle. He was quick to note that Moreno should be “more firm in his convictions.” An indigenous man quickly scolded the suggestion with a cold, “So you agree with the cuts?”

A young man sitting opposite me asked if protests of this magnitude take place in Brazil? “If so, they certainly aren’t indigenous-led,” I responded. In an attempt to draw parallels between public-sector cuts and privatization taking place in Brazil and Ecuador, I asked if he had heard of Brazilian President Jair Bolsonaro. He had not a clue. We exited the truck near Avenida Naciones Unidas and 10 de Agosto. I marveled at how pristine the streets and shops were, though many were closing early. Riot police were not firing tear gas, nor were there tanks blasting water or multiple tear gas rounds in the north. My young man, just before we departed, retorted that people in the north were, either by virtue or sheer luck, “more civilized.” I could only manage that they were less indigenous, less black.

Remember, Ecuador is part of the Americas, whatever that may or may not mean. Spin the wheel of fortune as you may, wherever the arrow lands certainly doesn’t conjure the memory of the indigenous village burnt to ash by Italian sailor-of-fortune Amerigo Vespucci, the man to whom the Americas owes its name. That act of arson, his way of saying ciao to Europe’s prized “New World,” was followed by detaining indigenous people. Vespucci’s own diary input recalls that he, “thereon made sail for Spain with 222 captive slaves.”

Historical narratives of this caliber are what make the fact that the Kichwa, Shuar, Waorani, Secoya, Cofán, and the full breadth of the 14 indigenous groups, including people of African-descent, are leading the protests in Ecuador even more compelling. In a reversal of history, indigenous nations, gobbled by the nation-state, are at the vanguard of resistance.

When Moreno’s government declared a state of exception last Thursday, indigenous nations followed suit, ordering the detention and handing down of “indigenous justice” to Ecuadorian soldiers and police officers trespassing on their territory. Fifty soldiers and police were detained by indigenous groups in the Nizag region and were released from custody on Monday. “The detention had occurred and negotiations were underway…the problem has been solved and the uniformed officers have been released,” announced Luisa Loza, governor of Chimborazo province.

Labeled “savages” in times past, today the mobilizing efforts of the indigenous have been associated with the work of “terrorist groups” and “criminal groups” by Moreno. Even former President Rafael Correa admitted that some “excesses” had taken place by some within the protests, adding “it is not true [however] that all of them are vandals or terrorists. The majority of people or peaceful, but still they have been repressed.”

Semantics and jokes aside, Guayaquil Mayor Cynthia Viteri helped to organize a “white march” this week. The purpose of this public gathering, as explained by one participant, was to “defend the rights of peace. To say: enough already, enough with the strike. Let’s come to a consensus.” Meanwhile, an indigenous protester in Quito, standing amid the rubble and fuming tear gas, insisted that his people would “fight on until he [Moreno] leaves. That man isn’t worth anything.” Moreno, for his part, took to national television on Monday night. He accused former Ecuadorian President Rafael Correa of stoking the protesters on as part of an organized coup, assuring viewers that the current events are “not a demonstration of social discontent in protest of a government decision. The lootings, vandalism and violence demonstrate that the attempt to destabilize the government is politically motivated.”

Correa has denied the claims made by his former vice-president who served under him from 2007 to 2013. “They implement these measures to increase poverty, but they are also inefficient. These measures do not generate growth, employment, anything,” Correa said. In 2017, shortly after winning the presidential election, Moreno broke ties with Correa, who remains 9,500 kilometers away in self-imposed exile in Belgium. He faces 29 criminal charges and pretrial detention, all of which he ascribes to “political persecution” by the ruling government.

Still, every so often, one comes across a spray-painted wall or individual protesters linking Moreno to Correa. Indeed, the attachment comes naturally, as they once rallied their political program and campaigns as members of the same political party, Citizen’s Revolution. However, as the protests kicked off last week, I came across Byron and Fernando at one of the burning roadblocks raging in centro. Blood brothers, they were covering the protests as part of the independent, on-the-ground news outlet, Guerrilleros Digitales Hechos. On separate occasions, two different protesters fired up anti-Moreno and anti-Correa chants. They were met by Byron’s unapologetic opposition, chanting in return that they should “be careful” with whom they associate Correa’s name.

UN calls for “maximum restraint,” but …

UN General Secretary Antonio Guterres has called on all sides to demonstrate “maximum restraint” and declared that protestors retained the “right of peaceful assembly in accordance with international law.”

Ecuador’s human-rights ombudsman’s office has so far reported the death of five people during the week-long protests. The first casualty was Inocencio Tucumbi, an indigenous leader from Cotopaxi. In a show of continued determination against the riot police, tear gas and tanks, indigenous groups detained eight police officers at the Casa de la Cultura in Quito on Thursday (Oct. 10). Speaking to a cheering crowd, Jaime Vargas, leader of the indigenous group CONAIE (Confederation of Indigenous Nationalities of Ecuador), told Moreno, “Don’t play with indigenous people.” He went on to say that he had ordered his “partners in the Amazon to close all oil wells” and that there would be “no dialogue with a murderous government.” According to government figures, more than 750 people have been detained during the protests and roughly 80 police officers have been injured. Both sides in this battle of wills — one donned in ponchos, the other in armageddon-suitable battle gear — will be subject to the economic shackles presented by austerity.

While Moreno, on the one hand, is holding firm to the fuel subsidy cuts, he has, on the other, reached out to indigenous groups for open dialogue. His sentiments were echoed by Ecuador’s foreign minister, José Valencia, who told The Guardian that “this is an extremely critical situation which is not a decision of the indigenous leaders — we trust their word.”

On Tuesday, responding to protesters’ demands that he step down as president, Moreno countered, “I don’t see why I should if I’m making the right decisions,” assuring that only strict reforms could salve the Andean country’s fiscal deficit and high debt.

Protestors have done anything but warm to his desultory olive branch. With thousands of indigenous people having already converged on Quito, they have vowed to remain on the streets until either the president rescinds the fuel subsidy cuts and austerity measures or, as said in colloquial jargon, “Fuera Moreno!”