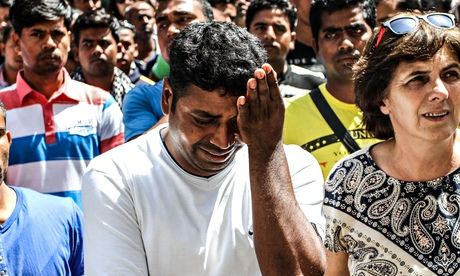 [The injustices of capitalism and imperialism never end. Third World migrants the targets of horrible brutality even in Europe. — NP]

A Greek court’s decision to acquit local farmers who admitted shooting 28 Bangladeshi strawberry pickers when they dared to ask for months of back pay has sparked outrage in the country.

Politicians, unionists and anti-racist groups roundly condemned the verdict describing it as a black mark for justice in a case that had shone a light on the appalling conditions in which migrant workers are often kept in Greece.

“I feel shame as a Greek,” said the victim’s lawyer, Moisis Karabeyidis, after the tribunal in the western port city of Patras, delivered the shock ruling. “This decision is an outrage and a disgrace … the court showed an appalling attitude toward the victims.”

Scores of migrants, many sobbing in disbelief, protested outside the court house after magistrates allowed two of the men, including the owner of the farm who had been accused of human trafficking, to walk free.

The Bangladeshis were shot at in April last year when they demanded to be remunerated for six months of unpaid work at a farm in Manolada in the southern Peloponnese. Four of the strawberry pickers were badly injured in the attack.

At a time of unrivalled crisis in Greece, where living standards have deteriorated dramatically after six straight years of recession, the case had triggered widespread indignation.

Media investigations showed the migrants to be working in subhuman conditions without access to proper hygiene or basic sanitation.

Politicians who took up the cause also weighed in on Wednesday saying the verdict sent set an unwelcome example for other employers to follow.

“It sends the message that a foreign worker can die like a dog in the orchard,” said Vassiliki Katrivanou, an MP with the main opposition radical-left Syriza party. She added that in a nation where fruit-farm labourers are frequently from overseas, the attack in Manolada was far from being an isolated incident.

“It leaves room for new victims by closing eyes to the brutal, inhuman and racist character of the exploitation suffered by workers on the land,” she said, pointing out that the ruling had been made on World Day against Trafficking in Persons.

The Greek farmers had instructed top criminal lawyers to defend them in a court drama that lasted for over a month. More than 40 prosecution witnesses testified in a case in which the prosecutor had asked that exemplary punishment be made.

Denouncing the judgment as scandalous, anti-racism organisations said it raised questions about the impartiality of the Greek justice system and vowed to step up protest action against the decision.

“We call upon unions and human rights movements to react against this unprecedented racist scandal,” said Petros Constantinou, coordinator of the Movement Against Racism and the Fascist Threat in a statement. “The hundreds of millions of profit made in the strawberry industry cannot come about by shooting labourers in strawberry fields.”