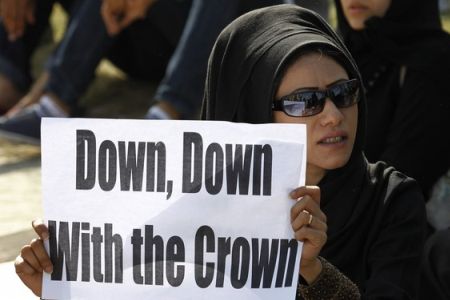 [The United States and its Gulf allies support the suppression of the people of Bahrain by the dictatorship there. This only goes to show that the United States is a hypocrite when it blathers on about “human rights.” — NP]

MANAMA, Bahrain (AP) — Bahrain’s highest court Monday upheld jail sentences against 20 opposition figures — including eight sentenced to life in prison — in a decision likely to touch off more street protests in the violence-wracked Gulf nation and bring renewed criticism from its Western allies.

The group includes a rights activist who staged a 110-day hunger strike last year to protest the verdicts and is part of widespread crackdowns on dissent since an Arab Spring-inspired uprising began nearly two years ago in the strategic island kingdom, which is home to the U.S. Navy’s 5th Fleet.

Bahrain’s majority Shiites, who have led sporadic unrest in past decades, claim they face systematic discrimination at the hands of the Sunni monarchy. Bahrain’s rulers have offered some reforms, including giving more powers to the elected parliament, but protest leaders say they fall short of demands for a role in key government affairs.

More than 55 people have died in the unrest since February 2011 and many opposition leaders and activists have been arrested, including the group of 20 charged with “plotting to overthrow” the ruling system.

Defense attorney Jalil al-Aradi said the court refused to reconsider the sentences or convictions, which were originally handed down in 2011 by a military-led tribunal created under temporary martial law-style rules. The group has claimed they faced abuses while in custody.

Among the eight sentenced to life is rights activist Abdulhadi al-Khawaja, who staged a more than three-month hunger strike last year in protest. The other 12 have sentences ranging from five to 15 years, with seven convicted in absentia.

The case has brought international pressure on Bahrain, including efforts by Denmark to free al-Khawaja, who also holds Danish citizenship. Scattered protests broke out in Bahrain shortly after the court decision, which could close all further appeal options.

Last year, the official Bahrain News Agency said the charges include “plotting to overthrow the regime” and having “foreign intelligence contacts” — a reference to Shiite powerhouse Iran and its proxy, Hezbollah in Lebanon. Bahraini leaders have accused Iran of having links to the protesters. Tehran has strongly criticized crackdowns against Shiites in Bahrain, but denies any active assistance.

A government statement at the time said the court “provided all assurances of a fair trial” and allowed defense attorneys full access to the defendants. It also said they received “full medical care” in prison.

The crisis in Bahrain has pushed Washington into a difficult corner. It seeks to keep it crucial security and political bonds with Bahrain’s leaders, but has increasingly condemned the ongoing violence and urged the country’s rulers to open wide-ranging talks with the opposition.

Bahrain also faces other showdowns over jailed activists, including rights campaigner Nabeel Rajab whose prosecution has brought criticism from Washington.