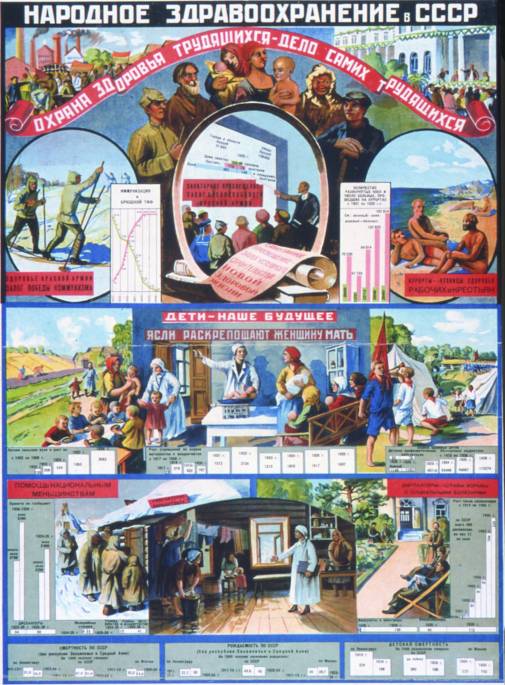 “Comrades, it is impossible to imagine the dreadful situation in the typhus regions, where the population is broken, weakened, without material resources, where all life, all public life ceases. To this we say, “Comrades, we must concentrate everything on this problem. Either the lice will defeat socialism, or socialism will defeat the lice!””

These remarks by Lenin were made during a time when the Soviet Republic, in it’s very early days, still had a decrepit and severely neglected medical system, and an impoverished population that was overwhelmingly in ill health. All of these things were inherited from the old Tsarist regime. In 1918, months after the Bolsheviks successfully seized power, the Spanish Flu had reached Russian shores, largely due to the fact that WWI Russian prisoners of war had brought the disease home with them after being released by Germany. They saw 150 Spanish Flu cases per week by late 1918. However, on top of that, the typhus epidemic — which was primarily caused by lice — was also sweeping the population, with hospitals seeing 1000 cases per week. And thus, the Soviets took swift action to organize the healthcare system so that it would become the socialized public health system where “the health of the individual [was] the concern of society as a whole.” With the trend towards disease prevention as an underlying principle, Soviet medicine eventually did overtake the imperialist nations’ own healthcare systems.

Creating living and working conditions where illness is not a rampant occurrence that threatens human lives is indeed possible. This runs counter to the logic of the capitalist system which is built in such a way that prioritizing the [capitalist] economy and profits is a must and is the only choice — even if it means that hundreds of thousands of lives are lost to needless, preventable deaths. Simply put, crisis management is not profitable under a predatory system that cannot solve the crises that it creates. Hence why many Western liberal democracies, but especially the United States, in spite of having the wealth and resources — as well as having more than enough time to prepare for such an outbreak (considering that the World Health Organization and China had issued warnings very early in 2020) — still refuse to impose serious, disciplined, and hard lockdowns in order to truly crush ‘the curve’ of the COVID-19 pandemic. A hard lockdown would at least be 2-3 weeks, with rigorous contacting tracing and strict health inspections in place, accompanied by a much larger number of business closures, as well as providing adequate social support for people who are out of work. Instead, many have opted for what are, at best, half-hearted lockdowns which were then followed by reckless, premature phased re-openings of businesses against the advice of public health officials.

As of this writing, COVID-19 infections have exceeded 120 million worldwide, while the global death toll is now over 2 million. In addition to that, new variant strains of the virus — first identified in the UK, Brazil, and South Africa — have emerged, which spread at a faster rate and are more deadly. That is the nature of viruses: they mutate and they do so at a faster rate the more hosts they encounter, especially when there is failure to effectively contain and manage the infections. Last year, it was estimated that the death rate of COVID-19 was 1% and it was predicted that it could very well kill 68.4 million people globally, with 90% of the world’s population infected, if the spread of the virus is allowed to intensify. Now that there is a significant presence of ‘variants’, the end of the pandemic could be delayed even further even if the much-needed vaccination programs have already begun. On top of that, even if a great number of those infected do survive and ‘recover’, many will continue to suffer from lingering long-term symptoms, which may require ongoing medical attention and could permanently put a significant number of 20-40 year olds out of the workforce.

Speaking from a purely economic standpoint (irrespective of whether or not it is a socialist or a capitalist economy we are speaking of), yes, of course the economy will take a hit if it is shut down to the degree that is necessary in order to effectively contain the spread of the virus. But it will be beneficial in the long-term — as seen in the examples of China and New Zealand — because regardless of whatever short-term damage may have been taken by the economy, hard lockdowns would have at least lessened or prevented the worst outcomes of the virus, such as the spread of ‘variants’, high per capita death rates, and/or significantly large numbers of people who have become disabled to the point of being unable to work. In the process, they would help the economy recover more quickly while people await the distribution of vaccines. It is quite ironic that in the quest to save and protect profits, a wealthy imperialist nation such as the United States, the “belly of the beast” as Che Guevara once called it (and which has arguably fared the worst in the world with regards to the pandemic), actually ended up doing more damage to its economy.

The answer to these problems and to the question of what is to be done in order to move forward is, of course, socialism. Why? Socialism’s promotion of the community is an important factor needed to mitigate a shared crisis, as opposed to the cult of individualism and the profit motive under capitalism which sees people’s lives as expendable. Aiming for the collective betterment of the masses so that their lives are prolonged, and also so that they do not suffer when they are of old age and are reaching the end of their lives, is nothing short of socialism’s scientific and humanistic goals of helping to fulfill humanity’s potential.

Furthermore, genuine international cooperation and investment into infectious disease research can help to prevent another pandemic in the future. Currently, there are approximately up to 800,000 novel viruses in wild animals that have the potential to cross over to humans and cause yet another global pandemic in the near future. Regretfully, there are not enough coordinated responses with regards to better tracking wildlife populations at the present. And as long as the decaying American Empire continues the imperialist drive towards war, sanctioning countries that are in need of medical supplies, stealing and hoarding personal protective equipment (PPE) shipments on behalf of private investors, and thus undermining global solidarity amidst a pandemic, this genuine international cooperation will be impossible.

Undoubtedly, the contradictions of capitalism remain immutable and a constant source of chaos and suffering around the world. It does not mean that the capitalist-imperialist class are invincible, however, and it certainly does not mean the end of class struggle. Public health must be a part of that struggle towards socialism and it should never be taken for granted, or sacrificed for the sake of the petty-bourgeois desire of returning to some idealized notion of “normalcy” — nevermind the fact that this “normalcy” under capitalism entails exploitation and preventable deaths of the masses.

Featured image: “People’s Health Care in the USSR,” 1927. Originally published by the Association of Artists of Revolutionary Russia. It can still be found in the Russian State Library today.