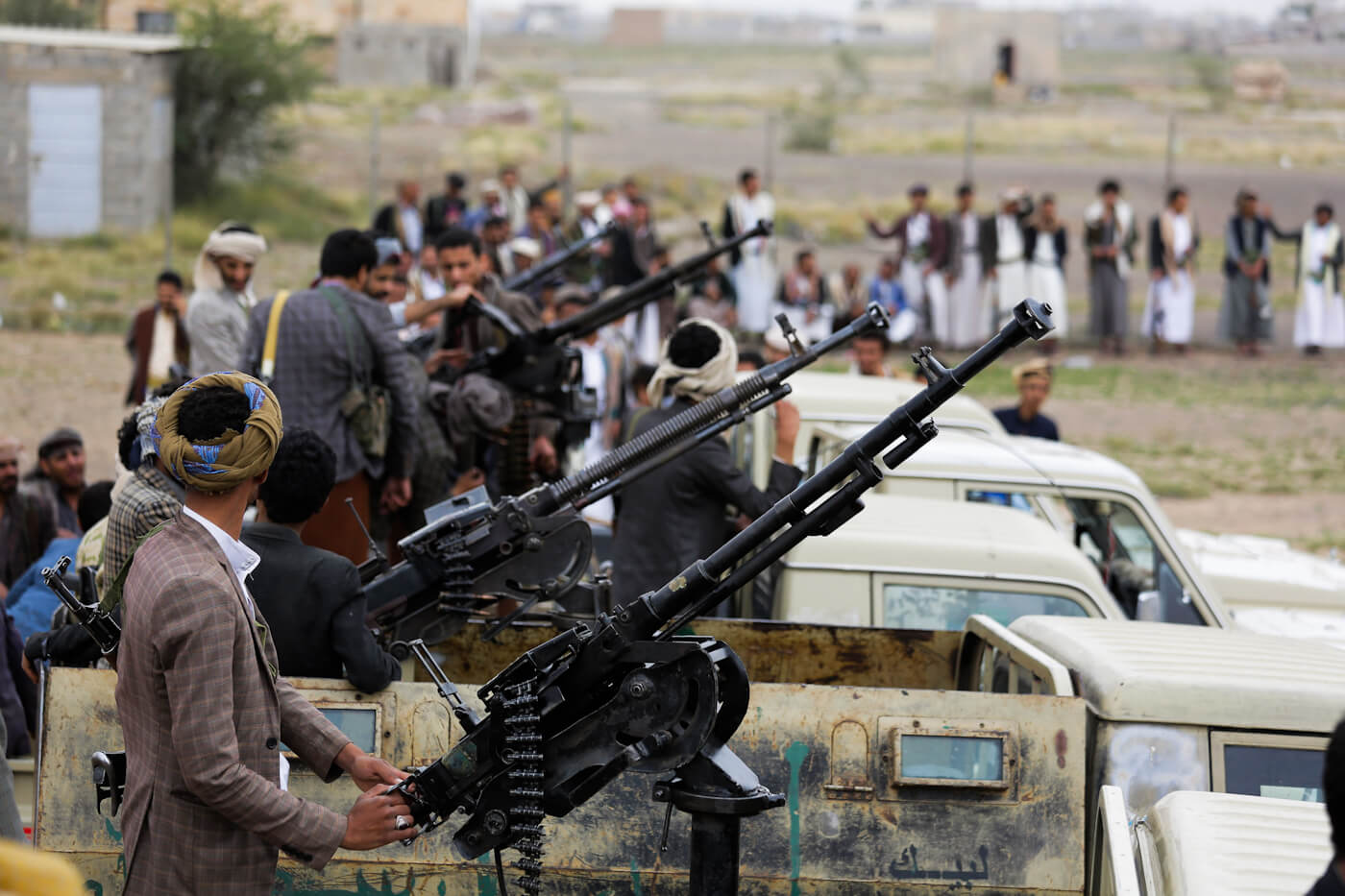 [Here we have some potentially good news concerning the war in Yemen. Reportedly, Houthi forces successfully attacked a Saudi Coalition military parade, using a drone and a ballistic missile. This strike demonstrates the expanding capacity of the Houthis to defend themselves from Saudi aggression. The now increased willingness of Coalition forces to negotiate is a reminder of our unfortunate reality: Appealing to the morality of the oppressor is impotent. Imperialists and their running dogs only respond to force. Victory requires a robust self-defense, and the strength to strike back at the enemy. —Uziel]

ADEN, YEMEN — At least 40 Saudi-led Coalition troops, including senior commanders, were killed and dozens more were injured when Yemen’s Houthi-allied army hit the Jala’a military base near the port city of Aden during a military parade on Thursday.

Witnesses on the ground told MintPress that chaos, screams and fumes spread across the camp following the strike, and Coalition fighter jets quickly scrambled over the area in the aftermath of the attacks. Photos from the scene show the red berets of fallen Saudi Coalition military officers laying in pools of blood. Initial reports from Aden indicate that at least 49 people were killed in the strike, though the death toll is expected to rise.

The spokesman for the Houthi-allied Yemeni army, Brigadier General Yahya Saree, said in a statement that a Qasef 2K (Striker) drone, as well as a new tactical medium-range ballistic missile that has not yet been publicly revealed, were used to carry out the attack on the military parade, killing dozens of Coalition-backed rebel commanders, including Munir al-Yaf’i (known as Abu al-Yamamah), the commander of the UAE-funded Security Belt.

Saree further stated: “The offensive operation and specifications of the new missile will be revealed at a press conference in the coming hours,” noting that the operation was a successful experiment and all vital areas within Saudi Arabia will be targeted without red lines.”

A high-ranking Houthi military source told MintPress that the location of the parade in Aden’s al-Bureiqa district has been home to a large UAE military presence since the start of the war and was being staged in preparation for military maneuvers against the Houthi-controlled provinces of Taiz and Dalea.

Meanwhile, Yemen’s Houthi-allied army launched a ballistic missile attack on a yet-unidentified military position in Saudi Arabia’s eastern Dammam province. The strike was the first time the Houthis or their allied forces stuck eastern Saudi Arabia, and the missile is reported to have traveled nearly 800 miles to reach its target. Dammam is a major oil export hub and houses several major companies including Saudi Aramco. There were no immediate comments from Saudi authorities on the attack.

Houthi spokesman Saree said in a statement following the attack:

The force launched an advanced long-range ballistic missile towards an important military target deep in Saudi Arabia’s Dammam in a new and practical test of the Yemeni missile force.”

Saree confirmed that the attack was a response to Saudi Arabia’s crimes against the people of Yemen, warning foreign companies and citizens to stay away from military positions in the Kingdom, which he said “have become legitimate targets.”

The Houthis hope they can deter the deadly attacks on Yemen that have been ongoing since 2015 when Saudi Arabia began its campaign of airstrikes on the country. The most recent such attack came last Monday and killed at least 14 civilians, including four children, when Saudi forces targeted the crowded Al-Thabit Market in the border town of Qataber in Yemen’s Sadaa province.

Hoping to force Saudi Arabia to follow the UAE and begin withdrawing its military forces from Yemen, the Houthis announced on Thursday that they would begin launching the second stage of a large military campaign on Saudi military positions on the Yemen-Saudi border — as well as on vital targets in the Kingdom’s southwestern regions of Asir, Najran, and Jizan — using ground forces as well as drones and ballistic missiles.

Pressure building on the Kingdom

According to a Houthi official who spoke to MintPress on the condition of anonymity, as the Houthis continue to launch attacks inside Saudi Arabia, it is likely Saudi Arabia will begin to withdraw troops from Yemen in the upcoming days. Pressure on the Kingdom has reached a fever pitch thanks to a near-continuous stream of Houthi attacks on vital Saudi targets in the past few months, including attacks on Saudi oil pipelines and Saudi airports in the Kingdom’s Asir and Jizan regions.

Compounding the pressure are the recent announcement by the United Arab Emirates that it would begin winding down military operations in Yemen and mounting international frustration over the war’s impact on civilians. All this has forced Saudi Crown Prince Mohammed Bin Salman to reportedly seek a deal with the Houthis to end the war.

The same Houthi official told MintPress that secret negotiations were held last week between the Houthis and representatives from Saudi Arabia and the UAE in the Houthi stronghold of Sadaa Province. Both Saudi Arabia and the UAE want to retain control of southern Yemen in exchange for ceding control of northern districts, including Yemen’s capital Sana`a, to the Houthis. The Houthis reportedly rejected the deal, insisting that coalition countries leave the whole of Yemen, according to the MintPress source.

Mehdi Al-Mashat, the head of the Houthis’ Supreme Political Council, recently signaled to delegates from the International Crisis Group a readiness to engage in dialogue with Saudi officials in order to achieve a just peace for all parties. Al-Mashat said that the Houthis are ready to stop drone and ballistic attacks on Saudi Arabia if the Kingdom stops its attacks on Yemen.

Saudi Arabia is faced with ever-dwindling options in its now four-year-old war on Yemen, following the hasty withdrawal of its most prominent ally, the United Arab Emirates. The UAE was known to be more efficient than the Saudis at managing the war, leaving Saudi Arabia without the luxury of walking out of Yemen without severely damaging the already tainted credibility of the war’s architect, Saudi Crown Prince Mohammed Bin Salman.

In the rocky mountain landscape that defines Yemen’s border with Saudi Arabia, the Kingdom has pushed hundreds of local rebels to recapture military sites from Houthi fighters in what is likely a bid to improve its standing in any potential negotiations. This week alone, Saudi-backed rebels launched more than 15 mostly-unsuccessful ground attacks in the Kingdom’s southern regions of Asir, Najran, and Asir.