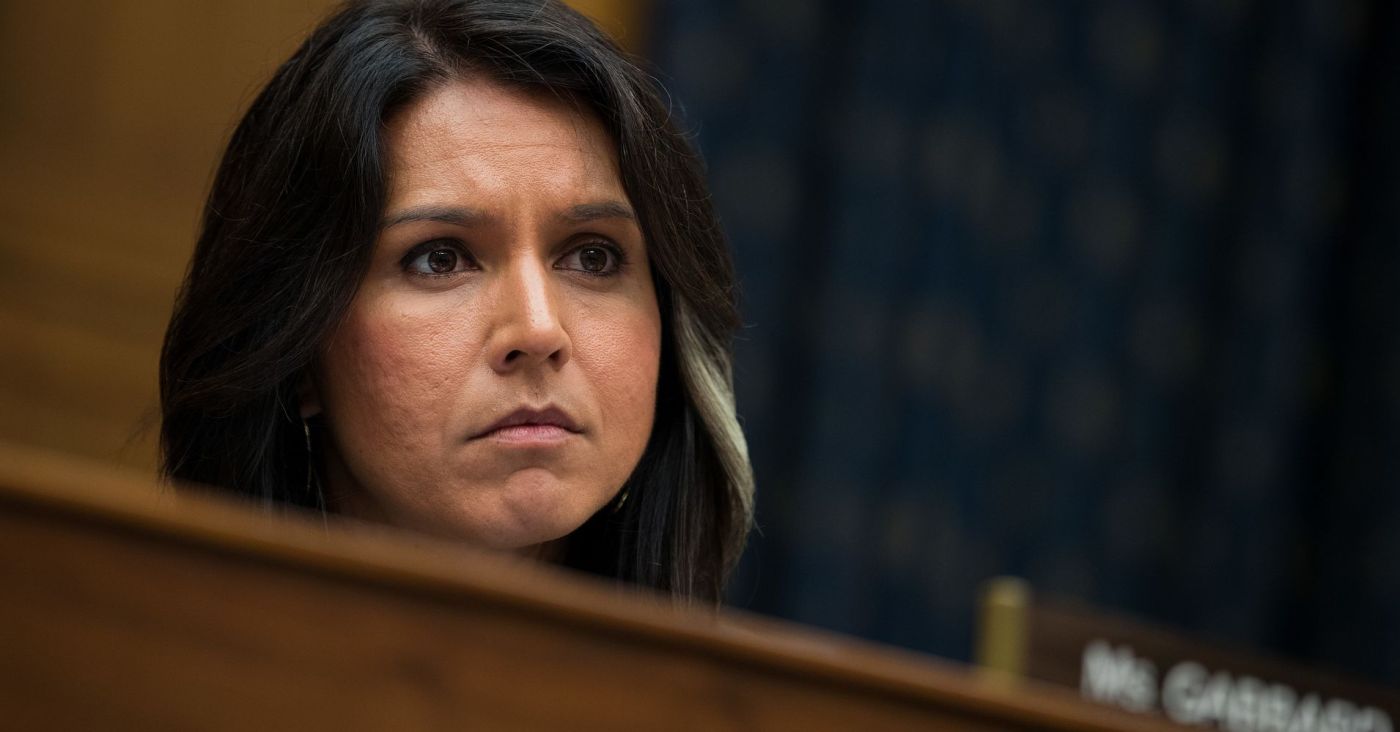 [In the United States, Democratic congresswoman and presidential candidate Tulsi Gabbard has cast her vote in favor of the anti-BDS bill that has now passed both the House of Representatives and the Senate and is awaiting final approval by US President Trump, after which it will go into effect as an official law. The BDS (Boycott-Divest-Sanction) movement is a grassroots movement to support the Palestinians in their struggle to resist the loss of their land and livelihoods in the face of overwhelming brutality and aggression committed by the racist state of Israel and its Zionist regime. Tulsi Gabbard often pretends to be a progressive, anti-war and anti-racist politician but her support for the anti-BDS bill shows her true character as yet another pro-Israel imperialist stooge. Nothing else can be expected of politics in the United States. The peace-loving people of the world must organize to resist US and Israeli aggression, using whatever means are effective. —Medved]

Congress member Tulsi Gabbard is feeling the heat over her vote last week in favor of a resolution that misrepresents and harshly condemns the nonviolent BDS – boycott, divestment and sanctions – movement for Palestinian rights.

The Hawaii Democrat, a candidate for her party’s presidential nomination, posted a video on Twitter on Saturday trying to spin her vote for HR 246 as a defense of free speech:

Watch this for why I voted for HRes246 and why I’ll always defend our right to free speech –> https://t.co/ov6n9wGNVW #TULSI2020 pic.twitter.com/deWdFJSGTv

She acknowledges receiving messages via social media “asking for more information about why I voted the way I did.”

She asserts that the resolution “does not in any way limit or hinder our First Amendment rights.”

Gabbard also pledges to continue opposing any legislation to “restrict freedom of speech by imposing legal penalties against those who participate in the BDS movement.”

She notes that she is cosponsoring Representative Ilhan Omar’s resolution HR 496, which backs the right to engage in political boycotts.

Those are laudable positions, but they are undermined by Gabbard’s vote for a resolution that is a stepping stone towards more state and federal anti-BDS laws.

Israel and its lobby warmly welcomed HR 246, undoubtedly seeing it as a clear victory in their ongoing effort to pass laws criminalizing BDS activism.

I would like to commend the US House of Representatives for overwhelmingly approving, by a great bipartisan majority, Democrats and Republicans alike, a decision against boycotts against Israel.

Thank you @RepJerryNadler for your leadership on H.Res.246 and for highlighting how the BDS campaign is anti-Israel, anti-peace, and damaging to U.S. interests. pic.twitter.com/5gKpfuk3Oa

Gabbard’s reasoning falls apart further when she explains why she backed the resolution in the first place.

“I voted for HR 246 because I support a two-state solution that provides for the rights of both Israel and Palestine to exist and for their people to live in peace with security,” Gabbard says.

“I don’t believe BDS is the way to accomplish that.”

(Note: In a written version of her statement, she is more nuanced, stating, “I don’t believe the BDS movement is the only or best way to accomplish that.”)

But Gabbard does not explain why a nonviolent movement, modeled on the one that helped end apartheid in South Africa, is harmful, or what her approach is to ending decades of Israeli military occupation and settler-colonization of Palestinian land.

Does she propose to continue the decades-old US and international policy of doing nothing, and even rewarding Israel, as it commits these crimes?

Platitudes about a two-state solution that equate the military occupier with an occupied people can’t hide the lack of a principled position.

In a message to supporters Monday, Omar Barghouti, the BDS movement cofounder singled out for criticism in HR 246, hit back at the House of Representatives for passing “a McCarthyite, anti-Palestinian resolution.”

“The resolution, based on lies, passed while Israeli military bulldozers were busy demolishing tens of Palestinian homes in occupied East Jerusalem,” Barghouti added.

Just 17 members of Congress voted against the resolution, while 398 backed it.

I oppose H. Res. 246 because it ignores the Netanyahu government’s brutality, dehumanization, and subjugation of millions of Palestinians living under military occupation.

The resolution is a litany of standard Israel lobby talking points.

It claims, for instance, that the BDS movement “undermines the possibility for a negotiated solution” and demands “concessions of one party alone” – namely Israel.

But the BDS movement does not demand any “concessions” from Israelis of any legitimate rights.

Rather, it seeks to end Israel’s violations of Palestinian rights by ending Israeli military occupation and colonization of the lands conquered in 1967; ending all Israeli laws and policies that discriminate against Palestinian citizens of Israel; and respecting the rights of Palestinian refugees, including the right to return to their lands and homes in accordance with international law.

The resolution makes no mention of these rights, and instead claims that it is Palestinians dispossessed by Israel who seek to deny “the right of the Jewish people to national self-determination.”

Israel and its lobby routinely demand that Palestinians and others explicitly recognize Israel’s purported “right to exist as a Jewish state.”

This demand means in practice that Palestinians would have to grant Israel a right to be racist against them in order to maintain Israel’s desired and violently gerrymandered domination of Jews over indigenous non-Jewish Palestinians.

Israel bars Palestinian refugees from returning to their homeland solely because they are not Jews.

By contrast, the BDS movement is explicitly anti-racist and based on universal principles of human rights.

By centering Palestinian rights, the BDS movement has succeeded in exposing Zionism, Israel’s state ideology, for what it is: raw racism against Palestinians.

The resolution backed by Gabbard and the vast majority of lawmakers aims to reverse this progress and demonize Palestinians merely for seeking basic rights and freedoms.

Gabbard is not the only one feeling heat over her vote.

Massachusetts Democrat Ayanna Pressley also tried to explain why she broke with the rest of the progressive “squad” – Ilhan Omar, Rashida Tlaib and Alexandria Ocasio-Cortez – to back HR 246.

She must be hearing some noise 🤔https://t.co/5Wltuunzrt

“What I heard resounding in community was that voting yes on this resolution affirmed to my constituents raised in the Jewish faith Israel’s right to exist, a view I share as a supporter of a two-state solution,” Pressley said.

What I heard resounding in community was that voting yes on this resolution affirmed to my constituents raised in the Jewish faith Israel’s right to exist, a view I share as a supporter of a two state solution.

Like Gabbard, Pressley used the moribund two-state solution as an alibi, and compounded the offense by equating opposition to the Palestinians’ struggle for their basic rights with affirming the feelings of Jewish Americans – many of whom actually oppose Zionism and support equality for Palestinians.

Jewish Voice for Peace and our 18,000 members thanks all 17 members of Congress who voted no on H.Res 246. By voting no these 17 showed a commitment to human rights and dignity for all in Israel/Palestine. pic.twitter.com/K8fs61cJy8

And also like Gabbard, Pressley has taken the seemingly contradictory step of backing Omar’s resolution.

Tulsi Gabbard is not part of the progressive squad, but she has attracted curiousity, attention and support from many on the left because of her outspoken opposition to disastrous US “regime change wars” and interventions, especially in Afghanistan, Iraq, Syria and Libya.

Yet she undermines her own anti-war stance in her video.

“Nothing is more fundamental to the identity of our country than the rights and freedoms that are enshrined in our Constitution,” she asserts. “I’ve fought to defend these freedoms both as a soldier and a congresswoman.”

Is Gabbard now really claiming that the Iraq invasion she has excoriated as a human catastrophe launched “based on false intelligence and lies from our leaders” was indeed a justified fight for American freedom and the Constitution?

One min you’re saying that regime change wars make USians less safe and the next you say you fought to protect First Amendment (in your anti BDS gobbledygook video that contains no crit of Israel). You seem set to discredit the anti war position. Are you? https://t.co/wnA3Wx2iyr

Gabbard has previously sent mixed signals about her views on Israel’s violent oppression of Palestinians.

She was one of the very few members of Congress to openly criticize Israel’s massacres of unarmed Palestinians during Great March of Return protests in Gaza.

Israel needs to stop using live ammunition in its response to unarmed protesters in Gaza. It has resulted in over 50 dead and thousands seriously wounded.

But she had earlier courted hardline anti-Palestinian extremists such as Shmuley Boteach and Miriam Adelson.

with philanthropist Miriam Adelson and Congresswoman Tulsi Gabbard of Hawaii at our Gala Dinner on 5 May pic.twitter.com/GhUXVWolXA

HR 246 was an opportunity for Gabbard to demonstrate clearly that she stands against Israel’s violations of Palestinian rights and in solidarity with people struggling for liberation.

Instead, she and far too many other Democrats opted to side unambiguously with the oppressor.

Still, the fact that Gabbard and Pressley felt they had to try to justify their votes shows that the mood is shifting and progressives can no longer adopt reflexive anti-Palestinian positions without strong grassroots pushback.