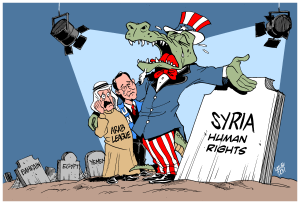 [The real war criminals are the imperialists who destabilized Syria, then armed and trained the al-Nusra Front and ISIS.  Any ad hoc tribunal would be a farce without including as suspects: the United States, NATO, and their Mideast allies. -Uziel]

GENEVA (Reuters) – United Nations war crimes investigators plan to publish names of suspects involved in Syria’s four-year war and push for new ways to bring them to justice, in a radical change of strategy announced on Friday.

Diplomatic sources said the independent Commission of Inquiry, led by Brazilian investigator Paulo Pinheiro, may publish some or all of hundreds of names on secret lists of suspects at the U.N. Human Rights Council on March 17.

Pinheiro, speaking to reporters after informally briefing the U.N. Security Council, refused to be drawn, saying any release of names would need to “be of some use” and have some “follow-up”.

“You have to understand that we have to keep the suspense,” he said.

The investigators have already drawn up four lists including military and security commanders, the heads of detention facilities, and commanders of non-state armed groups, including the so-called “emirs” of radical groups, they said. They now have a fifth list ready.

“Not to publish names at this juncture of the investigation would be to reinforce the impunity that the Commission was mandated to combat,” they said in a report to the Human Rights Council.

The report, the latest in a series documenting human rights abuses such as torture, sex crimes, murder and the use of child soldiers, said the international community had failed in its duty to protect Syria’s civilians.

The fighting has killed more than 200,000 people and forced 10 million from their homes, triggering a regional humanitarian crisis that shows no sign of ending.

Without naming Syrian President Bashar al-Assad’s allies such as Russia and Iran, nor countries backing rebel armed groups such as the United States, Qatar and Saudi Arabia, the investigators made plain that they blamed such countries for the continuing bloodshed.

“The consistent support provided to the government by its international backers, in terms of military equipment, advice and training, encouraged it to persist in its military and security approach based on the excessive use of force,” the report said.

Meanwhile support for opposition armed groups was too restricted to enable them to seriously challenge government forces, and had strengthened the hand of radicals, it added.

“The support given to the so-called ‘moderates’ has ultimately consolidated the dominance of extremist groups such as ISIS and Jabhat al-Nusra, which managed to overrun the positions of moderates and to gain loyalties among their ranks.”

The inquiry has repeatedly called for Syria to be referred to the International Criminal Court, but with that avenue blocked by divisions on the U.N. Security Council, it said an international ad hoc tribunal should be urgently considered instead.

“It’s absurd that the International Criminal Court does not have jurisdiction and is not investigating,” Britain’s U.N. Ambassador Mark Lyall-Grant said.

Syria has refused to cooperate with the investigators and its U.N. Ambassador Bashar Ja’afari called their inquiry biased.

“All this propaganda aims at diabolizing the Syrian government and misleading public opinion. They did it in the past and they will do it in the future.”