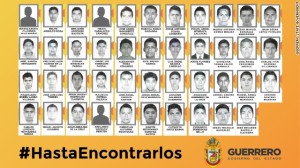 [The truth is the the entire Mexican state is guilty. It has been killing the masses for decades.. NP]

MEXICO CITY (Reuters) – A Mexican mayor and his wife were “probable masterminds” behind the disappearance of 43 student-teachers last month in the restive southwest, the country’s attorney general said on Wednesday.

The students went missing on Sept. 26 from Iguala in the southwestern state of Guerrero, after they clashed with police. The incident sent shockwaves across Mexico and undermined President Enrique Pena Nieto’s claims that Mexico is getting safer under his watch.

So far, federal authorities have arrested 52 people in connection with the incident, including dozens of police who have links to a gang called Guerreros Unidos, or “United Warriors.” The gang’s leader, Sidronio Casarrubias, was caught last week.

Thousands marched in Iguala on Wednesday to protest the disappearance of the teachers in training. After the march, masked men set fire to the municipal offices with Molotov cocktails and smashed the windows.

“We have issued warrants for the arrest of Iguala Mayor Jose Luis Abarca, his wife Mrs Pineda Villa and police chief Felipe Flores Velazquez, as probable masterminds of the events that occurred in Iguala on Sept. 26,” Murillo said at a press conference.

During the September incident, police shot and killed one student and detained the others before turning them over to Guerreros Unidos gang members, Murillo added. He said the gang then mistook the students for members of rival criminal group “Los Rojos,” or “The Reds.”

He also said that according to Casarrubias’ information, Pineda, who the government says comes from a family of high-ranking drug traffickers, was Guerreros Unidos’ top boss within the Iguala government.

Authorities continue to investigate nine mass graves in the area where they have already found 30 bodies. Initial examinations showed none of the bodies belonged to the students.

The case has overshadowed Pena Nieto’s bid to restore order in Mexico and shift the focus away from endemic gang violence and onto economic growth in Latin America’s No. 2 economy. Drug violence exploded during the rule of his predecessor, Felipe Calderon, and has claimed about 100,000 lives since 2007.

Security forces killed 19 suspected criminals in the state of Tamaulipas on Tuesday alone, the state government said on Wednesday.