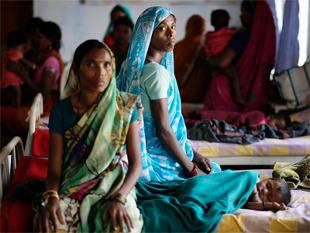 RAIPUR: The outlawed CPI (Maoist) has blamed Chhattisgarh Chief Minister Raman Singh and state Health Minister Amar Agrawal for the deaths of 13 women during a recent sterilisation drive and sought their resignation.

The Maoists dropped pamphlets and put up banners in Chhattisgarh’s insurgency-hit Dantewada district protesting against the sterilisation tragedy.

“The pamphlets and posters were recovered from a road near Kumharras village under Dantewada police station limits last evening,”Dantewada Superintendent of Police Kamlochan Kashyap told PTI.

In the pamphlets, the West Bastar Division Committee of the banned outfit has alleged that the Chief Minister and the Health Minister were responsible for the deaths of the poor women during the sterilisation camps in Bilaspur district.

“They have lost the moral ground to continue in their positions,” it said.

The Chhattisgarh government has constituted a probe panel under a retired judge to investigate the botched surgeries that have also left 138 women ill.

While 12 of the 83 women, who were operated upon at Nemichand Jain Cancer and Research Centre at Pendari village of Takhatpur block on November 8 died, Chaiti Bai is the lone casualty from the camps at Pendra block, where around 56 women underwent surgeries at three different camps on November 10.

Laparoscopic surgeon Dr R K Gupta of Bilaspur district hospital, who performed tubectomy procedures on 83 women at a camp at Pendari village in a matter of few hours, was arrested. Dr Gupta and Bilaspur’s chief medical and health officer Dr R K Bhange were later dismissed from service by the state government.

Ramesh Mahawar, director of a drug company-Mahawar Pharma Pvt Ltd which allegedly supplied sub-standard medicines that were administered to the victims of sterilisation surgeries, and his son Sumit have been arrested and all the products of their manufacturing unit have been banned.