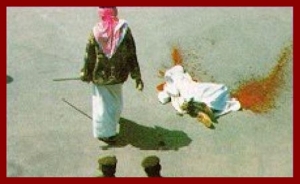 A recent article from http://aattp.org/ points out the hypocrisy of the US media and foreign policy:

“We condemn ISIS’ public beheadings, but in 2012-13, our allies in Saudi Arabia cut the heads off of 79 people.

Let’s play “Compare and Contrast” for a moment: Two oppressive, authoritarian Muslim regimes acting under the auspices of Sharia Law publicly behead scores of non-violent people, primarily to instill fear in those who might resist said regime’s self-asserted authority over the region.

People whose heads are cut off are disproportionately foreign nationals, or locals with religious or ideological differences. One of them is ISIS, the other is the government of Saudi Arabia. Which one are we bombing again?”

The truth is that the imperialist agenda in the Middle East is not about human rights. It is about maintaining power in order to better control and exploit the region. Both Saudi Arabia and ISIS are helping the imperialist agenda. The United States and Suadi Arabia, along with Turkey, other Gulf and Arab states, and Israel, have aided the Islamic insurgency against Syria, which is dominated by ISIS. The imperialists fanned the flames of ISIS, now they claim to be helping to put the flames out. In reality, the imperialists are using ISIS to spread sectarian chaos and weaken the ability of the Syrian and Iraqi regime to resist imperialism.