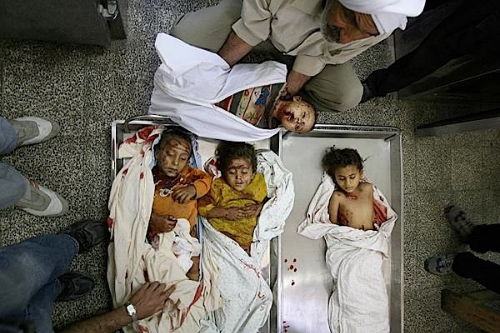 [Israel is a racist, militarized apartheid society propped up by US and Western aid and support. The racist state could not exist there without external support. Israel and its allies are perpetuating a slow-motion genocide against all Palestinians, both Christian, Muslim, and even Jew. This is a genocide that is armed and financed by the USA. Israel has for a very long time been the top recipient of US-military aid. The claim in the article that the US is out to coax Israel on behalf of the Palestinians is false. The US has always sided with the racist Israeli regime even if small disagreements exist between the two. Israel is a key part of maintaining US hegemony in the region. –NP]

Despite relentless US efforts to coax Israel and the Palestinians into reaching an elusive peace agreement, tensions between the two sides have shown little sign of abating as the negotiations, which are scheduled to last nine months, have limped past the halfway point.

“There is a strong party and there is a weak party, and the Israelis want to dictate rather than negotiate,” he told journalists at a dinner in the West Bank.

“The Israelis want to replace occupation by force with occupation by an invitation, with our signature, and it will never happen.”

In Ramallah, presidential spokesman Nabil Abu Rudeina accused Israel of trying to scupper peace talks with the two shootings in Jenin and Qalqilya.

“This dangerous Israeli escalation aims to thwart American and international efforts to move forward with the peace process, and leads the negotiations to a dead end,” Abu Rudeina said in a statement published by the official WAFA news agency.

In an address to his rightwing Likud party late on Wednesday, Netanyahu blamed the Palestinians for the lack of peace, and promised there would be no let-up in construction on land they want for a future state.

In the first of the two shootings, Israeli troops killed an Islamic Jihad militant in a confrontation in Jenin refugee camp Wednesday night, said sources on both sides.

In a statement, the army said troops had gone in “to arrest a suspect” but opened fire after coming under attack with gunfire, home-made grenades and explosive devices.

Several Palestinians were wounded in the exchange and one died on the way to hospital.

Several hours later, a Palestinian security officer was shot dead just before dawn during an exchange of fire in Qalqilya, the army said, describing him as a “known gunman” responsible for firing at troops.

Palestinian sources said the man, an intelligence officer, was shot three times in the chest as he was on his way home.

The latest deaths raised to 28 the number of Palestinians killed by Israeli troops this year.

Meanwhile, just 10 days before releasing another 26 veteran Palestinian prisoners in line with commitments to Washington, Netanyahu vowed that Israel would continue developing the settlements.

“We will not stop, even for a moment, building our country and becoming stronger, and developing… the settlement enterprise,” he said in remarks broadcast by army radio on Thursday.

He said the obstacle to peace was “the ongoing opposition to the existence of a national Jewish homeland within any borders”.

His comments followed a report by the Haaretz news website that US Secretary of State John Kerry had urged Netanyahu and his cabinet “to exercise maximum restraint in announcing new construction”, in tandem with the impending prisoner release on December 29.

Two previous rounds of prisoner releases in August and October were accompanied by Israeli announcements of fresh construction, sparking deep anger in Ramallah.

Earlier this month, reports emerged that Washington was trying to delay the planned prisoner release.

Israeli newspaper Yediot Aharonot meanwhile said Thursday Pope Francis would make a brief visit to Israel and the Palestinian territories from May 25, his first to the Holy Land.

One thought on “Bloodshed, settlements hike pressure on Mideast talks”