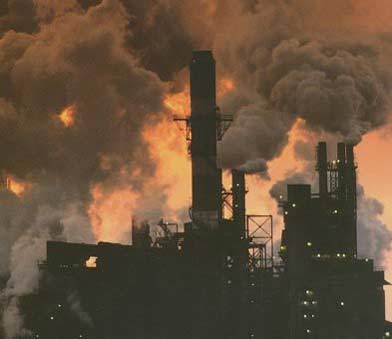 [“Capitalism, in its quest for profits, had led us to a point where there are several global environmental catastrophes on the horizon: global warming, dead zones in the oceans, mass extinctions, etc. Capitalism is the problem, not the solution to environmental problems. Capitalism is pushing the planet’s ecosystem to the brink of destruction.

The warning signs are all around us. Capitalism, imperialism, First Worldism, is incompatible with the survival of the ecosystem as we know it. — NP]

Carbon dioxide was measured at 400 parts per million at the oldest monitoring station which is in Hawaii sets the global benchmark. The last time the worldwide carbon level was probably that high was about 2 million years ago, said Pieter Tans of the National Oceanic and Atmospheric Administration.

That was during the Pleistocene Era. “It was much warmer than it is today,” Tans said. “There were forests in Greenland. Sea level was higher, between 10 and 20 meters (33 to 66 feet).”

Other scientists say it may have been 10 million years ago that Earth last encountered this much carbon dioxide in the atmosphere. The first modern humans only appeared in Africa about 200,000 years ago.

The measurement was recorded Thursday and it is only a daily figure, the monthly and yearly average will be smaller. The number 400 has been anticipated by climate scientists and environmental activists for years as a notable indicator, in part because it’s a round number — not because any changes in man-made global warming happen by reaching it.

“Physically, we are no worse off at 400 ppm than we were at 399 ppm,” Princeton University climate scientist Michael Oppenheimer said. “But as a symbol of the painfully slow pace of measures to avoid a dangerous level of warming, it’s somewhat unnerving.”

Environmental activists, such as former Vice President Al Gore, seized on the milestone.

“This number is a reminder that for the last 150 years — and especially over the last several decades — we have been recklessly polluting the protective sheath of atmosphere that surrounds the Earth and protects the conditions that have fostered the flourishing of our civilization,” Gore said in a statement. “We are altering the composition of our atmosphere at an unprecedented rate.”

Carbon dioxide traps heat just like in a greenhouse and most of it stays in the air for a century; some lasts for thousands of years, scientists say. It accounts for three-quarters of the planet’s heat-trapping gases. There are others, such as methane, which has a shorter life span but traps heat more effectively. Both trigger temperatures to rise over time, scientists say, which is causing sea levels to rise and some weather patterns to change.

When measurements of carbon dioxide were first taken in 1958, it measured 315 parts per million. Some scientists and environmental groups promote 350 parts per million as a safe level for CO2, but scientists acknowledge they don’t really know what levels would stop the effects of global warming.

The level of carbon dioxide in the air is rising faster than in the past decades, despite international efforts by developed nations to curb it. On average the amount is growing by about 2 parts per million per year. That’s 100 times faster than at the end of the Ice Age.

Back then, it took 7,000 years for carbon dioxide to reach 80 parts per million, Tans said. Because of the burning of fossil fuels, such as oil and coal, carbon dioxide levels have gone up by that amount in just 55 years.

Before the Industrial Revolution, carbon dioxide levels were around 280 ppm, and they were closer to 200 during the Ice Age, which is when sea levels shrank and polar places went from green to icy. There are natural ups and downs of this greenhouse gas, which comes from volcanoes and decomposing plants and animals. But that’s not what has driven current levels so high, Tans said. He said the amount should be even higher, but the world’s oceans are absorbing quite a bit, keeping it out of the air.

“What we see today is 100 percent due to human activity,” said Tans, a NOAA senior scientist. The burning of fossil fuels, such as coal for electricity and oil for gasoline, has caused the overwhelming bulk of the man-made increase in carbon in the air, scientists say.

The speed of the change is the big worry, said Pennsylvania State University climate scientist Michael Mann. If carbon dioxide levels go up 100 parts per million over thousands or millions of years, plants and animals can adapt. But that can’t be done at the speed it is now happening.

Last year, regional monitors briefly hit 400 ppm in the Arctic. But those monitoring stations aren’t seen as a world mark like the one at Mauna Loa, Hawaii.

Generally carbon levels peak in May then fall slightly, so the yearly average is usually a few parts per million lower than May levels.