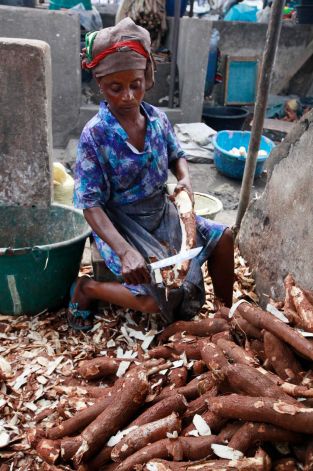 [Under socialism,  under the New Power, under Leading Light Communism, such a food crisis would not exist. Food production would be organized scientifically to serve the people, not to serve profit. Under the New Power, diverse food reserves would be stockpiled to avoid such disasters. In addition, populations would not be so dependent on one or two staple foods. Rather, food production would be diversified so that if one crop was hurt, it could be easily replaced. Capitalism is all about profit. People do not matter. — NP]

JOHANNESBURG (AP) — Scientists say a disease destroying entire crops of cassava has spread out of East Africa into the heart of the continent, is attacking plants as far south as Angola and now threatens to move west into Nigeria, the world’s biggest producer of the potato-like root that helps feed 500 million Africans.

“The extremely devastating results are already dramatic today but could be catastrophic tomorrow” if nothing is done to halt the Cassava Brown Streak Disease, or CBSD, scientist Claude Fauquet, co-founder of the Global Cassava Partnership for the 21st Century, told The Associated Press.

Africa, with a burgeoning population and debilitating food shortages, is losing 50 million tons a year of cassava to the disease, he said.

In Uganda, a new strain of the virus identified five years ago is destroying 45 percent of the national crop and up to 80 percent of harvests in some areas, according to a new survey, said Chris Omongo, an entomologist and cassava expert at Uganda’s National Crops Resources Research Institute.

“The new strain looks to us to be much more aggressive,” Omongo said.

Fauquet said one problem is that the virus attacks the tubers underground, so a farmer can husband his crop for up to 18 months and only realize when he goes to dig up the cassava that all his fields are infected.

Omongo has participated in a training video — funded by U.S. aid to the Association for Strengthening Agricultural Research in Eastern and Central Africa — where farmers in north Tanzania are shown digging up cassava and cutting into roots turned black and brown with rot. The farmers say the rotten bits taste bitter and are inedible. They say they spend hours trying to chop away blighted parts.

The disease is spreading too fast to measure its impact, say scientists. A moderate infection with up to 30 percent root damage decreases the market value of cassava tubers drastically, to less than $5 a ton instead of $55, according to a study published last year in the journal Advances in Virology.

“Recent estimates indicate that CBSD causes economic losses of up to $100 million annually to the African farmer and these are probably an underestimate, as the disease has since spread into new areas,” the article said.

The cassava disease is endemic along the Indian Ocean coast of East Africa, affecting Kenya, Tanzania and Mozambique. In the past, it had not struck at high altitudes. But recently the disease has been found at up to 1,500 meters (nearly 5,000 feet) above sea level in Uganda, Congo and Tanzania’s lake zones, the article in Advances in Virology reported. The disease also is found in Burundi and Rwanda.

In the past year, Fauquet said, symptoms of the virus have been found as far south as Angola and moving into West Africa. The white fly that acts as a vector for the disease also has been spotted in Cameroon, in central Africa, and in Zambia to the south.

“If the disease makes it to the Congo Basin, which is a big cassava producer, and — really frightening — reaches West Africa and Nigeria, the biggest producer, you can just imagine the impact, the magnitude,” Fauquet said.

This week, scientists are meeting in Bellagio, Rome, to discuss what can be done.

Fauquet said what is needed is the kind of international effort that the West put into creating a virus-free potato after World War II, ending the chance of a disaster such as the Irish potato famine. Similar work has been done on other crops over the past 50 years, including sugar cane and sweet potatoes, he said.

But it has never been done in Africa for many reasons, including the corruption that makes it a difficult environment in which to operate and differences in transport, communications and infrastructure across the continent’s many countries, Fauquet said.

What’s needed is a virus-free cassava seed and the Italian meeting is hosting major funders including the Bill and Melinda Gates Foundation, hoping to convince them of the importance of the project.

“In the next 40 years, starting now, we need to invest in cassava because it could tremendously help Africa and the world but also so that we are more prepared for more diseases,” Fauquet said.

Scientists have called cassava “the Rambo” of food crops, a singular food source expected to become even more productive as the Earth warms, resistant to drought and simply shutting down until rains come. Cassava can also be left in the ground and stored there, providing food security for lean times. Scientists look to cassava as the best bet for African farmers threatened by climate change.

Some 500 million Africans eat cassava, boiled and roasted like potatoes, or pounded into flour to make a stiff porridge-like staple.

Omongo said the good news is that scientists at his research institute have developed a variety of cassava that is more tolerant to brown streak disease, but they cannot produce enough to meet even a quarter of Ugandan farmers’ needs.

“When I say tolerant, I mean that perhaps only 5 percent gets infected instead of an entire field,” he said. “What we need is research to continue so that we can come up with resistant varieties.”

Nigeria’s Finance Minister Ngozi Okonjo-Iweala this week said her country is trying to substitute imported wheat with locally grown cassava, and has so far succeeded in replacing 20 percent of its wheat imports. She said they also are having success encourage people to cook and eat bread made from cassava flour instead of wheat.