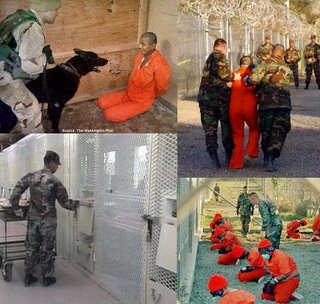 US says hunger strike grows to 21 at Guantanamo

SAN JUAN, Puerto Rico (AP) — A hunger strike at the Guantanamo Bay prison has grown and now involves at least 21 men, a U.S. military official said Monday while denying reports trickling out from prisoners through lawyers that there is a more widespread protest and lives are in danger.

No prisoner faces any immediate health threat from the strike, though two have been admitted to the prison medical clinic because of dehydration, said Navy Capt. Robert Durand, a spokesman for the detention center at the U.S. base in Cuba.

In recent weeks, as lawyers returned from Guantanamo with accounts of clients weak from hunger and an angry standoff with guards, the military had said no more than a handful of prisoners met the definition of being on hunger strike, which includes missing nine consecutive meals.

That figure rose to 14 on Friday, and then grew by seven over the weekend. It has become the largest and most sustained protest at Guantanamo in several years, but Durand insisted there is no evidence to support reports of a strike involving most of the 166 men held there.

“The detainees certainly have the support of one another,” Durand said. “But if it was 166, I would tell you it was 166. I don’t have a reason to lowball or pad the numbers.”

A prisoner from Yemen, Yasein Esmail, told his attorney that he lost about 35 pounds (15 kilograms) after striking for 29 days and was struggling to keep his balance, according to notes taken by the lawyer, Washington-based David Remes, during a March 5 visit.

“Many of the detainees are desperate,” Esmail told his attorney. “They feel like they’re living in graves.”

The U.S. military does not identify hunger strikers and will not let journalists speak to prisoners so the account could not be verified.

A letter sent Thursday to Defense Secretary Chuck Hagel that was signed by more than 50 lawyers who have represented Guantanamo prisoners said they had received reports that “the health of the men has continued to deteriorate in alarming and potentially irreparable ways.” They urged him to meet with them and work out a solution with the military officials in charge of the prison.

Lawyers say the protest began Feb. 6, when a relatively new officer in charge of camp operations, Army Col. John Bogdan, ordered an intensive search of the communal pod-like area where a majority of detainees are held. Guards confiscated personal items such as family letters, photos and mail from attorneys. The prisoners also said government-issued Qurans were searched in a way they considered religious desecration.

Another apparent factor in the protest is the fact that the U.S. has largely stopped transferring and releasing prisoners because of security restrictions imposed by Congress and the administration of President Barack Obama.

Durand said there had been no changes in the way searches are conducted. He said Qurans are searched for contraband by Muslim translators, not guards, and are treated in a respectful way. The protest is simply a way to attract attention, he said.

“They have sort of fallen out of the public view and most of the legal issues have been settled,” Durand said. “If you want to burst back into the media then you have to start complaining about either Quran abuse or detainee abuse or deteriorating conditions.”

Hunger strikes have been a fixture at Guantanamo since shortly after it opened in January 2002. The largest one began in the summer of 2005 and reached a peak of around 131 prisoners, when the facility held about 500 detainees. The U.S. military broke the protest by strapping detainees down and force-feeding them a liquid nutrient mix to prevent them from starving themselves to death. As of Monday, the U.S. was feeding eight of the 21 prisoners on strike, Durand said.