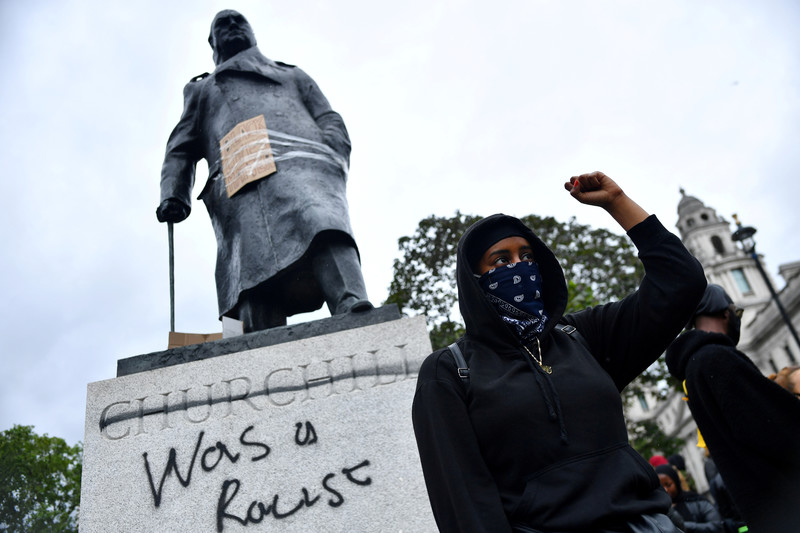 [Statues across the US and around the world are being toppled, defaced or have come under public scrutiny. Imperialism and its legacy is one of historical and continued blood and cruelty. While pulling down symbols of this brutal past is cathartic, we must remember that it is not revolutionary to do so. These monuments stand where the capitalist/imperialist institutions still hold power. Studying the past and learning from it, identifying and toppling the institutions and systems of oppression, these are the important aspects of revolutionary work. Let us continue to study the past both in its terror, such as US imperialism, and in its glory, such as the many accomplishments of various experiments in socialism. This study shall inform revolutionary thought and the formulation of a better world. –Terryn]

“We cannot now try to edit or censor our past,” the British Prime Minister Boris Johnson tweeted earlier this month, defending the statue of Winston Churchill in London’s Parliament Square.

The plinth of the statue has recently been daubed with graffiti drawing attention to Churchill’s racism. Johnson is nonetheless adamant that the wartime leader “fully deserves his tribute.”

“Those statues teach us about our past, with all its faults,” Johnson has argued, claiming that “we cannot pretend to have a different history.”

We cannot now try to edit or censor our past. We cannot pretend to have a different history. The statues in our cities and towns were put up by previous generations. 3/8
— Boris Johnson #StayAlert (@BorisJohnson) June 12, 2020

It is absurd and shameful that this national monument should today be at risk of attack by violent protestors. Yes, he sometimes expressed opinions that were and are unacceptable to us today, but he was a hero, and he fully deserves his memorial. 2/8
— Boris Johnson #StayAlert (@BorisJohnson) June 12, 2020

But “pretending to have a different history” is precisely the purpose of such statues.

The statue shows us the Churchill who helped defeat the Nazis.

It hides the Churchill who supported and enabled other crimes against humanity. These include crimes committed against Palestinians.

For Palestinians, keeping us ignorant of the past “with all its faults” serves to keep us ignorant of the present. It helps perpetuate an injustice that Churchill was instrumental in creating and that continues unabated today with official British support.

Since the early days of British involvement with Zionism, Churchill sanctioned the dispossession of non-Jewish Palestinians by assuring that they have no voice in the affairs of their own land. “In the interests of the Zionist policy,” he stated in August 1921 as the government minister in charge of Britain’s colonies, “all elective institutions have so far been refused to the Arabs.”

A snapshot of Churchill’s stances on Palestine and race is found in the records of the 1937 Peel Commission hearings, convened to address a major revolt in Palestine.

The revolt was a response to how Britain – working in tandem with the Zionists – had introduced a system of discrimination whereby Palestinians were denied jobs, land and resources in favor of Jewish settlers. Britain, then administering Palestine under a League of Nations mandate, violently suppressed the revolt.

The 1937 hearings began with a review of the reasons the British signed on to the Zionist settler project, leading to the Balfour Declaration of 1917. One might assume that old-fashioned imperialism — the belief that the Zionists would serve as surrogate empire builders — may have been part of the thinking, but this was never voiced at the hearings.

The stated reason was the First World War. Britain wanted the US to step up its involvement in the war and Zionist propagandists claimed that they could rally American Jews to the task – if Britain “gave” them Palestine.

As David Lloyd George, Britain’s prime minister when the Balfour Declaration was signed, testified, “The Zionist leaders gave us a definite promise” that “they would do their best to rally Jewish sentiment and support throughout the world to the Allied cause … if the British government were to declare their sympathy for a Jewish administration of Palestine.”

It was important to “rally Jewish sentiment,” Lloyd George said because in 1917 “there were no American divisions at the front … in the trenches … and we had every reason at the time to believe that in both countries the friendliness or hostility of the Jewish race might make a considerable difference.”

Churchill testified the same. Zionism was embraced because “it was a potent factor on public opinion in America” from which “we gained great advantages in the war.”

But Horace Rumbold, who had been Britain’s ambassador in Berlin for the five years ending with Adolf Hitler’s rise to power in 1933, and who is remembered for his unvarnished warnings of Hitler’s ambitions, asked whether Zionist policy is worth “the lives of our men, and so on.” And did it follow, he asked Churchill, that having “conquered Palestine we can dispose of it as we like?”

Churchill replied to that and similar questions by invoking commitments given when Britain captured Palestine toward the end of 1917. “We decided in the process of conquest of [Palestine] to make certain pledges to the Jews,” Churchill said.

Apparently skeptical, the head of the commission, William Peel, asked Churchill if it is not “a very odd self-government” when “it is only when the Jews are a majority that we can have it.”

Churchill responded with a blunt argument of might: “We have every right to strike hard in support of our authority.”

The historian Reginald Coupland nonetheless told the hearings that the “average Englishman” would wonder why the Arabs were being denied self-government, and why we had “to go on shooting the Arabs down because of keeping his promise to the Jews.”

Peel, similarly, asked Churchill if the British public “might get rather tired and rather inquisitive if every two or three years there was a sort of campaign against the Arabs and we sent out troops and shot them down? They would begin to enquire, ‘Why is it done? What is the fault of these people?… Why are you doing it? In order to get a home for the Jews?’”

“And it would mean rather brutal methods,” added Laurie Hammond, who had worked with the British colonial administration in India. “I do not say the methods of the Italians at Addis Ababa,” referring to Benito Mussolini’s Ethiopian massacre of February 1937, “but it would mean the blowing up of villages and that sort of thing?” The British, he recalled, had blown up part of the Palestinian port city of Jaffa.

Peel agreed, and added that “they blew up a lot of [Palestinian] houses all over the place in order to awe the population. I have seen photographs of these things going up in the air.”

But when Peel questioned whether “it is not only a question of being strong enough,” but of “downing” the Arabs who simply wanted to remain in their own country, Churchill lost patience.

“I do not admit that the dog in the manger has the final right to the manger,” he countered, “even though he may have lain there for a very long time.” He denied that “a great wrong has been done to the Red Indians of America, or the Black people of Australia,” by their replacement with “a higher grade race.”

One tumultuous decade later, at the turn of 1948, the wholesale ethnic cleansing, expropriation and subjugation of Palestine jumped to full-throttle. Yet Churchill, the great warrior against the horrors of facism and racialism when it concerned Europeans, had not changed his views on the “dogs in the manger.”

In January 1949, speaking to the British parliament, Churchill dismissed the victims of Zionist ethnic cleansing as “Arabs [who] came in [to Palestine] during the period of the 25 years of British administration,” and who were “getting employment under the conditions we created.”

Lest this be dismissed as judging Churchill by the mores of today, it is worth noting comments made by the British Foreign Secretary, Ernest Bevin during the same parliamentary debate. Bevin argued that “the driving of poor innocent people from their homes, whether it is in Germany by Hitler, or by anybody else … is a crime, and we really ought to join together to stop it if we can.”

Challenging the iconography of past leaders is not just to expose their hypocrisy, but to expose ours. Today Britain, and by extension all of Europe, the US and Canada, actively empower the ongoing crimes against Palestinians.

So long as these crimes continue, Churchill’s statue has taught us nothing.