(Above) President Jair Bolsonaro, by the School of Samba Vigário Geral in the parade of Carnival 2020, in allusion to the Brazilian clown ‘Bozo’. Very appropriate. 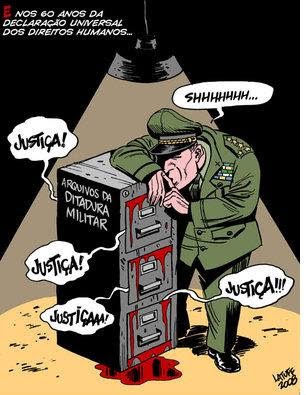 Fifty-six years ago, on April 1, 1964 a coup d’état in Brazil installed a fascist regime that pledged to combat corruption and the “Red Threat” against freedom, economy, and social order. A government was created where the powerful were above the law — a perfect climate for corruption. Thousands of opponents were pursued, arrested, tortured, and executed. The press was censored, cultural and academic activity was policed and blacklisted, and laws and regulations were suspended, with the National Congress closed and a series of economic crises with foreign debt that followed. This in turn impoverished and slummed the majority of the country and favored the latifundium and everything that comes with it: environmental devastation, the destruction of the native people, and the restoration of slavery. There is ample documentation to verify these crimes. These atrocities were even recognized by the CIA, as they admitted that the corporate-military regime of 1964 was much more oppressive than the USSR, a fact referenced in this article from the Intercept. Despite the historical facts, Brazil keeps showing itself ignorant and even favorable in these recent years. It is this sentiment that brings us to our current topic. As that famous German once said… 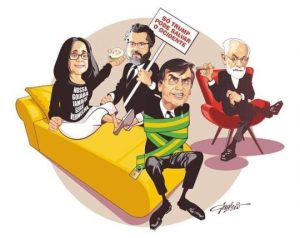 What began more than half a century ago as tragedy, today seems to want to turn into a comedy, but it’s not funny. Those who do not live in Brazil may not see it, but Bolsonaro and his ministers consistently prove week after week that they do not serve to govern, they want only to benefit themselves and their corporate sponsors. They try to disguise their incompetence by speaking of and taking bizarre measures that only appease their most fanatic and inexpressive voters. The Minister of Women defending machismo, a Minister of the Education speaking nonsense and destroying education, a Minister of Economy actively impoverishing the poor and elderly, a Minister of the Health criticizing the isolation against the global COVID-19 pandemic, an ambassador of tourism arrested in Paraguay for falsifying a passport and money laundering, and a Secretary of Culture defining culture in a deeply offensive way.

All because Bolsonaro aspires to be like Gueisel, who ordered the execution of opponents personally, but he fails. Instead, he and his family try to suppress scandals such as Rachadinha, or to hide Queiroz, Bebbiano, or the ‘laranjal’, pretending that there is no corruption in the government. Yet he is still being investigated. He wanted to be able to freely eliminate his opponents, but his former allies seem to be vanishing like ‘file burn’, as we say here. Bolsonaro wanted an ‘Anticrime Package’ to allow his mafioso friends to freely kill anyone they wanted, but the Congress blocked Sérgio Moro (Justice Minister). He wanted a DOI-CODI (political police) to censor the press, but he only manages to gain favor from some bought off TV channels and yells in rage at his webcam. He wanted to end ‘the disorder of the universities ‘, but he is constantly replacing the Ministry of the Education with one incompetent minister after the other, while still not getting approval for his ‘Future-se’ program, (also known as ‘Fracture-se’). He would love to revoke the mandate of several governors, “to send 1 jeep with 1 soldier and 1 corporal,” to close the Federal Supreme Court (his sons talk such of things in public), or to issue another Institutional Act number 5 to close the National Congress. Instead, he must watch quietly from quarantine while they form a parallel government, or else he will incur a fine of R$ 100.000,00 and repudiation of several authorities that he has no control over, including many of his former friends!

Despite being a failed imitation of Brazil’s last fascist government, and far from having any dictatorial force, we need to acknowledge that Bolsonaro’s regime has still managed to harm the most poor.

There is high unemployment, Public Health money being used for the Electoral Fund, various cuts to funding for peoples’ needs, and many departments ill-equipped to work such as FUNAI, and Instituto Palmares. A war against the poor that will hopefully cost him and his cronies the elections of this year.

There is no doubt that this will be a black mark in Brazil’s history. It is impossible to know how long Bolsonaro’s talc will continue to float until it falls. It most likely will not last until 2022. The leftist opposition now has a perfect opportunity to wake up from the state of shock that it entered into ever since Bolsonaro was elected against all expectations. The Brazilian people, most of whom have yet to gain an interest in revolution or socialism, elected a right-wing demagogue not for his military career, but because they feared ‘’the corruption and the immorality” as represented by the Workers Party, according to Rede Globo (as if it were the only or main corrupt Brazilian party). Now both the ‘left’ and the right, even the ones posing as more rational, have proven unreliable. A completely new force needs to emerge from all this desolation, but a new one that knows how to see and value of all that is most beautiful and grand in the old, while remaining modern. That force is the Leading Light.

Come to the Light of Truth!

Our Sun is rising!

Our Day is coming!

This article has been translated into English and was originally published in Portuguese. Click here for the original article.