[The latest move by the Democratic Party to announce impeachment proceedings against US President Trump demonstrates the sheer hypocrisy of American liberals and the utter moral bankruptcy of the entire American political system. The Democrats are accusing Trump of blackmailing Ukrainian president Zelensky by withholding military aid from Ukraine unless Zelensky examined the financial activities of Hunter Biden, the son of current Democratic presidential candidate Joe Biden. Ironically, Joe Biden himself threatened to withhold $1 billion in loans to Ukraine while he was Vice President under Obama unless Ukraine’s top prosecutor, Victor Shokin, was fired. Hunter Biden sat on the board of a Ukrainian energy company whose wealthy owner was under investigation by Shokin. However, what both the Democrats and Republicans refuse to mention is that the Ukrainian government has been committing egregious crimes against humanity since 2014 in its ongoing attacks against the civilian populations of the DPR and LPR, the breakaway states of eastern Ukraine whose populations refuse to live under a fascist regime. Both the Obama and Trump administrations have provided military support to the criminal regime in Kiev despite its atrocities against civilians.

Liberals in the US ignore the unpleasant reality that it was Obama who oversaw US support for the neo-Nazi coup in Ukraine that toppled the elected government of Yanukovych. Likewise, it was Obama who initiated US intervention in Syria with the aim of overthrowing the Syrian government, including support for head-chopping terrorists rebranded “moderate rebels.” It was also Obama who was Commander-in-Chief when the US began providing logistical support and intelligence to Saudi Arabia in its ongoing genocidal war against Yemen. And it was Obama who ordered airstrikes against Libya in support of the fanatical extremist militias that overthrew Gaddafi and destroyed the country, resulting in a fractured, war-torn state overrun by slave traders and warlords. The Democrats, like the Republicans, are ruled by psychopathic mass-murderers; yet, vast numbers of Americans still support them. Liberals hypocritically proclaim that they are “the resistance,” when they are in fact part of the problem. Thus, the announcement of impeachment proceedings against Trump can only serve to rally American liberals around a reactionary, pro-imperialist political ideology.

It is time to wake up to the truth that all imperialist war criminals need to be overthrown — and not by other war criminals with nice slogans and comforting lies, but by a powerful revolutionary movement with proletarian leadership. Long live the real revolution! —Medved]

“The actions of the Trump presidency have revealed the dishonorable fact of the president’s betrayal of his oath of office, betrayal of our national security and betrayal of the integrity of our elections,” said Pelosi. “Therefore, today, I am announcing the House of Representatives is moving forward with an official impeachment inquiry.”

Pelosi’s move comes in the run-up to the US 2020 campaign. Many critics believe that with Russiagate and the Mueller probe effectively dead after three years, the Democrats are now trying to tie-down Trump in a legal quagmire designed to stretch right through his re-election 2020 campaign. Indeed, Pelosi has already stated publicly that this is her party’s intention:

.@SpeakerPelosi accidentally tells the truth here, which is that everything they’re doing is an attempt to stop @realDonaldTrump from getting democratically re-elected: “He can’t win; that is very serious.” pic.twitter.com/uP9zmJY07P

This new controversy was born out of an alleged anonymous whistleblower – likely from one of the US intelligence agencies, who has eavesdropped and recorded the President’s call. As the ‘whistleblower’ is not named, then it cannot yet be called a whistleblower, but rather, a leaker.

Meanwhile, Trump responded by saying he has now authorized the release of the full transcript of the phone call with Ukrainian president Zelensky.

This latest scandal appears to have paved over actions taken by Joe Biden himself in 2016, where vice president Biden threatened the Ukrainian government with withholding a billion+ loan unless they fired the Ukrainian prosecutor who was investigating Biden’s son. Washington Post explains:

In 2016, the then-vice president threatened to withhold $1 billion in U.S. loan guarantees to Ukraine if the government did not fire the country’s top prosecutor, Viktor Shokin. According to the New York Times, “Among those who had a stake in the outcome was Hunter Biden … who at the time was on the board of an energy company owned by a Ukrainian oligarch who had been in the sights of the fired prosecutor general.” The Post reports that it is “unclear how seriously Shokin — who was under fire by U.S. and European officials for not taking a more aggressive posture toward corruption overall — was scrutinizing Burisma when he was forced out.” But what is clear is that Biden bragged about getting him fired, declaring last year: “I looked at them and said, ‘I’m leaving in six hours. If the prosecutor is not fired, you’re not getting the money.’ Well, son of a b—-. He got fired.”

The most damning part of this story is that Biden publicly boasted about his intervention on camera during a CFR panel event in 2018. Watch: 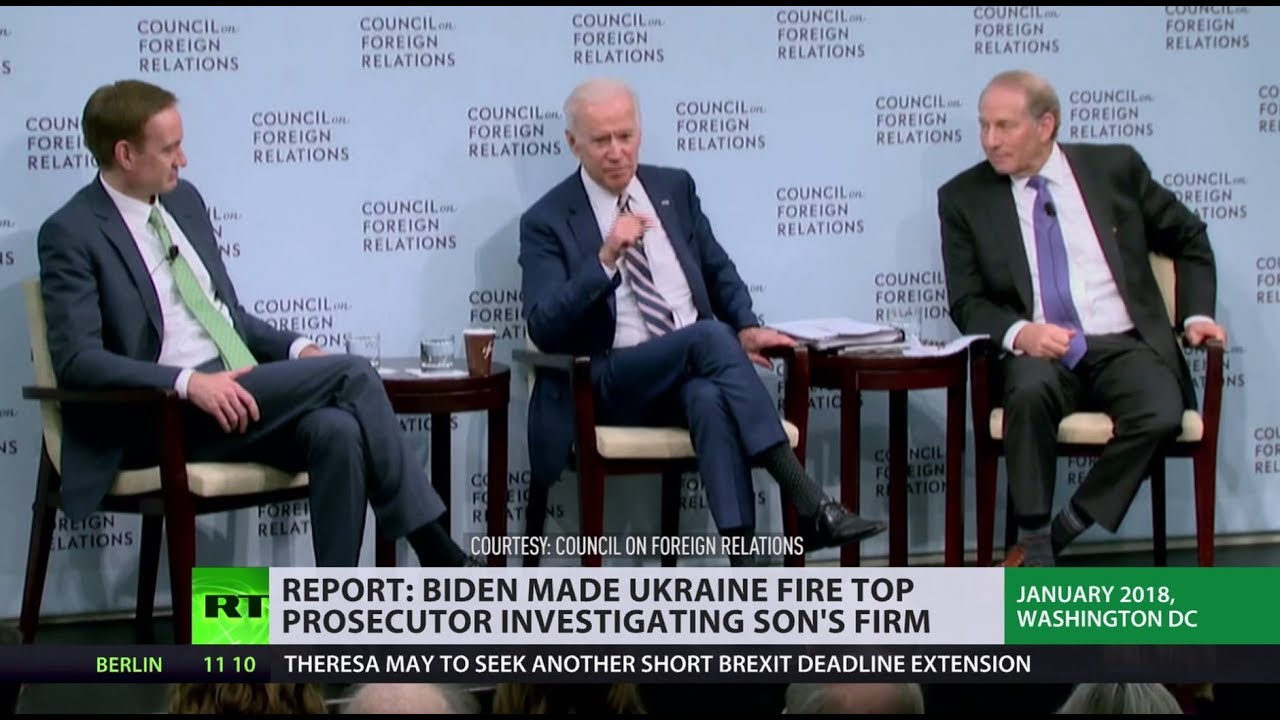 Biden told reporters, “I have never spoken to my son about his overseas business dealings.” That is flatly untrue. Hunter admitted in an interview with the New Yorker that his father expressed concern about the Burisma post at least once: “Dad said, ‘I hope you know what you are doing,’ and I said, ‘I do.’” Moreover, the New Yorker reports that, “In December, 2015, as Joe Biden prepared to return to Ukraine, his aides braced for renewed scrutiny of Hunter’s relationship with Burisma. Amos Hochstein, the Obama Administration’s special envoy for energy policy, raised the matter with Biden.”

Here, the Democrats are effectively doubling-down on a new variant of Russiagate, only this time they have staked their entire political capital on the reputation of Joe Biden and his record regarding US-Ukrainian relations. It’s very possibly that by opening this issue up, the Democrats may also have exposed Biden to increased scrutiny over his own corrupt activities as VP, but also over the overall failure of the Obama administration’s Ukraine policy. Furthermore, this could also open up an inquiry into the Obama administration and Democratic National Committee’s own collusion with Ukrainian officials and operatives to create the Russiagate narrative which has plagued US politics for the last three years. This would include the fact that the Ukrainian Embassy had already confirmed that a DNC contractor had solicited Trump dirt in 2016.

Even if Congress eventually votes to impeach the president, this does not guarantee that he can be removed from office. However, should impeachment proceeding move ahead, then it’s certain the process will extend throughout the entire length of the 2020 Election cycle – guaranteeing that most US mainstream media outlets will be reorienting any Trump re-election coverage over to the protracted ‘impeachment hearings.’