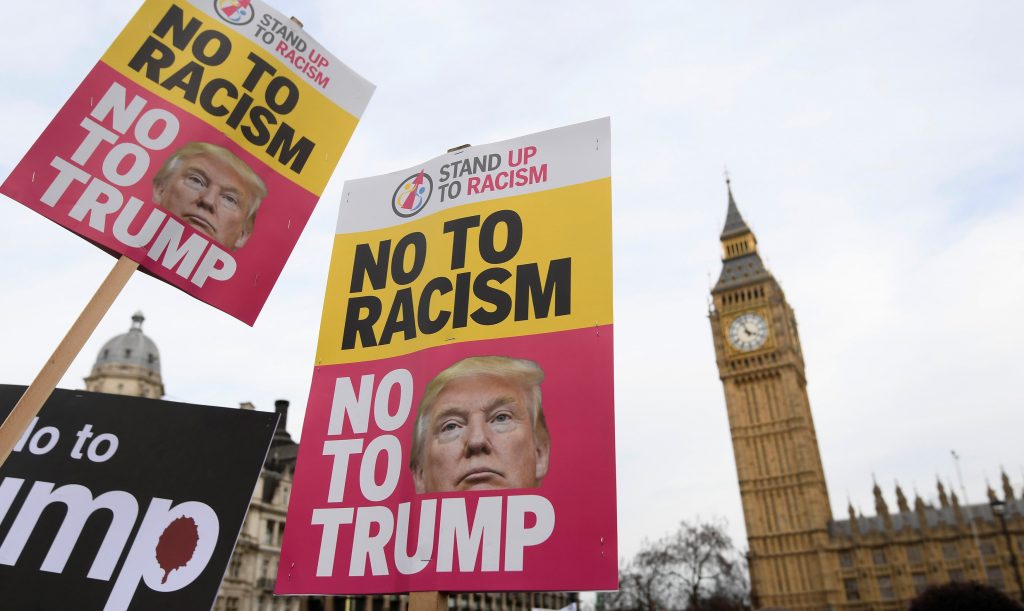 US President, Donald J. Trump is expected to visit London on the 13th of July amidst significant public opposition. Such opposition ought to be manifested in a phenomenal mass demonstration in London. It is expected by the Stop the War Coalition UK to reach up to two million demonstrators:

“Polling suggests that 4 percent of the population have said that they would ‘definitely’ take part in protests against the trip, which is equivalent to more than two million people.”

The demonstration is expected to rally so much support, coaches have been organized by the campaign group, Together Against Trump, to transport activists from all over England and Wales to go to London to ensure a great turnout.

As anyone can imagine, the mass opposition against Trump’s visit will be multi-faceted. We’ll be expecting relatively reactionary sympathizers such as mainstream liberals who decry Trump’s distasteful racism and misogyny, but keep quiet about their pro-imperialist tendencies. Indeed, the chauvinistic traits seen in Trump’s personality are indisputable; implications of such reactionary thinking should not be trivialized. However, it is indisputable that the real danger of Trump’s visit is not merely bringing such a personality to the UK, but promoting the imperialist ‘special relationship’ between the UK and the US.

The promotion of such diplomatic ties sets a precedent for increased militarization to consolidate the long-declining hegemony of the US and other NATO powers – no doubt they will not hesitate to use their vast military empires to re-consolidate their hegemony. Such military expansion is already being used to victimize the masses of the Proletarian World, dispelling the illusion that Trump was going to buck the trajectory of US interventionism. On the contrary, air strikes have increased dramatically under the Trump administration; US military intervention in Yemen, Pakistan, and Somalia have intensified under Trump with an increase in ‘counterterrorism’ operations. The usage of devastating drone strikes have increased over 400 percent since Trump assumed Presidency. Trump voters expressed bitter disappointment because they thought that Trump was going to scrap ‘humanitarian interventionism’ – which is increasingly being exposed as a cover for militarised imperialism on both the left and right – for a non-interventionist ‘America First’ policy.

What reactionary right-wing commentators fail to understand is that militarised imperialist intervention does put America first – as Obama, Bush, Clinton, Carter, Reagan etc. had previously overseen. They were all putting America first, since such military interventions are crucial to securing US hegemony globally to maintain the imperialist exploitation of the Proletarian World. Where there is oppression, there is resistance. Military intervention is necessary to put down armed struggles for national liberation. Comprador governments in the Proletarian World can’t hold down their populations on their own, they require the support of their imperialist masters in the west. Pools of cheap labor, debt-servicing, and resources are fished through the barrel of the imperialist gun. There is no room for diplomacy and deliberation because, and as Mao said, political power grows out of the barrel of a gun. The struggle for national liberation, and the struggle against the armed wing of imperialist capital, must consequently grow out of the barrel of a gun.

Trump didn’t U-turn on his non-interventionist rhetoric because he’s two-faced; he U-turned because the President has no power whatsoever to curb the will of the ‘deep state’ or the capitalist-imperialist system. Besides trivial policies such as noise ordinances, alcohol regulation, and traffic legislation, the struggle between Republican and Democrat in the US or Labour and Tory in the UK is nothing but theatre. It is not the individual persona of the head of state that takes precedence; it is the system, of which such a person is appointed to represent and justify, that does. Is it any coincidence that Trump’s opponent, warmonger, and mass murderer, Hillary Clinton, alienated anti-Trump Americans because she, too, was too hawkish?

Many anti-Trump activists make the same liberal error of putting too much emphasis on the personality of the President rather than highlight that militarist escalation under Trump is a by-product of the imperialist system of the US. Maz Saleem, from Stand up to Trump states:
“Donald Trump is an open racist and sexist, a volatile and dangerous character who seems set on taking the West into further wars.” Whilst Trump is certainly set on taking the West into further wars, the commentator doesn’t seem to understand that it is not simply the will of Trump – but rather, it is the will of US imperialism. In light of this error made by the leadership of the opposition to the presidency of Trump, it is our duty as Leading Light Communists to join the anti-Trump demonstrators not only to strengthen opposition to the ‘special relationship’ but to educate them. Opposition to Trump will become much more politically advanced once activists understand that opposition to Trump must translate into opposition to the system he is the face of. Only then will they understand that opposition to the atrocities committed by the Trump administration is meaningless unless such an opposition recognizes that they are contingent to imperialism.

Racism is increasingly promoted and is manifested in official state policy in both the US, the UK and the like. Hence why we have seen an unprecedented rise in Islamophobia in the populations of the Bourgeois World. This is because racism is, and always has been, entirely conducive to an imperialist foreign policy; from the old school biological racism of Rudyard Kipling’s ‘White man’s burden’ backed up by pseudoscience like phrenology – to the ‘new atheist’, alt-right Islamophobia, attributing the devastation of the Middle East to the civilizational ‘backwardness’ of Muslims. Racism dehumanizes people with grave consequences. People become desensitized to the gravity of imperialist atrocities because of the subtle yet ubiquitous racism propagated by imperialist mainstream media. Such media cleverly paints the masses of the Proletarian World as less than human, as mere statistics.

Racist narratives also serve to justify imperialist foreign intervention as it establishes a ‘white man’s burden’ paradigm. Imperialism is not seen by the people in the Bourgeois World or comprador elements in the Proletarian World for what it is: the oppression and exploitation of the masses of the proletarian world. No, racist narratives serve to paint imperialism as a charitable affair where the heroic soldiers of the western world go to the far stretches of the orient to civilize backward peoples. It is still endlessly propagated by our media. Our troops are going into the Middle East to save the Arab women and children from their evil, perverted Muslim men or to save the Syrians from their brutal dictator, Assad. Such narratives gloss over the notion that the masses of Proletarian countries have the ability to overcome their own domestic contradictions and oppressions. Subsequently, the “heroic West” is falsely portrayed as the only civilization with the agency to enforce freedom and democracy on a global scale. Denying the people of the Proletarian World agency to engage in their own struggles is a fundamentally racist outlook. Hence why calls for ‘America First’ are predicated upon the gross misunderstanding that foreign military intervention is some sort of ‘white-savior’ mission to rescue Proletarian World peoples from their own ‘backwardness’.

Donald Trump took the world by surprise as the Bourgeois World had never seen such an explicitly racist head of state since the hegemony of ‘progressive’ liberalism. The chauvinistic rhetoric of Trump used to only be recognized as the ramblings of fringe elements of the right-wing. His ascendancy to the presidency of the US has given such chauvinistic views worldwide legitimacy making it okay to be more explicitly racist and Islamophobic. Trump’s interaction with other heads of states of the Bourgeois World symbolizes that the ‘mainstream’ and the ‘international community’ has become much more accommodating to racism and chauvinism.

The increasing legitimization of racism is detrimental to the anti-imperialist movement. For the growth of a vibrant anti-imperialist movement requires the promotion of internationalism. Such internationalism will make the people see that the lives of the masses of the Proletarian World are worth nothing less than the people living in the Bourgeois World. The promotion of internationalism must include a re-humanization of the masses of the Proletarian World. It is vital that people restore their sensitivity to the atrocities committed by imperialism. Racism creates, for the Bourgeois World public, a sense of superiority and entitlement: Why should they take a stand in solidarity for lesser peoples? Why should they be compelled to civilize backward peoples? The struggle against racist and chauvinistic attitudes will create a grounded collective consciousness of humility. Such a humility where people will feel the burden of responsibility to stand in solidarity with the masses of the Proletarian World without any sense of liberal paternalism.

A worldwide protest against Trump’s visit to the UK will convey a message that takes a stance against the increased tolerance of racist and chauvinistic attitudes. It is vital that we make racists afraid again. Just as racism is vital to justify imperialism – anti-racism, anti-fascism and proletarian internationalism are vital to justify anti-imperialism and the most advanced, scientific line of Leading Light Communism.

Oppose the ‘Special [imperialist] Relationship!
Struggle against racism and chauvinism!
Demonstrate against Trump’s visit to the UK!

Dylano Williams is the Cell Leader of LLCO – Brighton and Hove, you can reach him by emailing dylanollco@protonmail.com