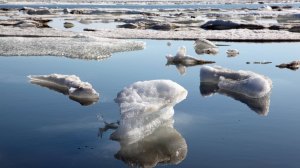 Antarctica’s icy edges are melting 70 percent faster in some places than they were a decade ago, according to a new study in the journal Science.

These massive ice shelves serve as a buffer between the continent’s ice-sheet system and the ocean. As they disintegrate, more and more ice will slip into the sea, raising sea levels by potentially huge amounts.

This study is just the latest bit of horrible news from the bottom of the world. Last year, we found out that the West Antarctic ice sheet was in terminal collapse, which could raise sea levels by 10 to 15 feet over a few hundred years. Then, earlier this month, we learned that an enormous glacier on the other side of the continent is in the same state, and could contribute about the same amount to sea-level rise.

This latest research, from the Scripps Institution of Oceanography, reinforces those findings, adding to the evidence that the continent’s future looks quite grim. Using satellite data, researchers found that “ice-shelf volume change accelerated from negligible loss” between 1994 and 2003 to “rapid loss” between 2003 and 2012. Within a century, a number of ice sheets, which are vanishing by dozens of feet per year, could completely disappear.

Though the geology of east and west Antarctica is different — the ice in the east stretches out over water like a shelf, while the ice in the west is stuck to land below the sea — the entire continent is eroding due to warmer ocean waters and drier weather. The changing water temperature and decreased precipitation speak to broader, long-term changes in climate across the continent, though the west Antarctic is more immediately threatened.

Were Antarctica to melt completely, it would raise sea levels by more than 200 feet. That, of course, would take hundreds of thousands of years. And researchers reiterate that they need more and better data before they understand exactly what’s going on with the continent, and how quickly we can expect it to shrink global coastlines.

But the bad news doesn’t seem likely to stop anytime soon: On Monday and Tuesday, it was a balmy 63 degrees Fahrenheit at the bottom of the world, a record high.

One thought on “Antarctica is basically liquefying”