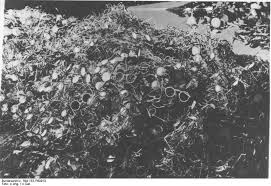 According to reports, hundreds of thousands of Polish people, as well as Jews from a number of other European countries, have been held prisoner there in appalling conditions and many have been killed in the gas chambers.

Few details have emerged of the capture of Auschwitz, which has gained a reputation as the most notorious of the Nazi death camps.

Some reports say the German guards were given orders several days ago to destroy the crematoria and gas chambers. Tens of thousands of prisoners – those who were able to walk – have been moved out of the prison and forced to march to other camps in Germany.

Details of what went on at the camp have been released previously by the Polish Government in exile in London and from prisoners who have escaped.

In July 1944 details were revealed of more than 400,000 Hungarian Jews who were sent to Poland many of whom ended up in Auschwitz. They were loaded onto trains and taken to the camp where many were put to death in the gas chambers.

Before they went they were told they were being exchanged in Poland for prisoners of war and made to write cheerful letters to relatives at home telling them what was happening.

According to the Polish Ministry of Information, the gas chambers are capable of killing 6,000 people a day.

Another report from Poland told of mass arrests in the village of Garbatka near Radom in the early hours of one morning in August 1942. Workmen were accused of plotting to blow up a local factory. Twenty were executed on the spot, the rest were sent to Auschwitz.

Since its establishment in 1940, only a handful of prisoners have escaped to tell of the full horror of the camp.

In October last year, a group of Polish prisoners mounted an attack on their German guards. The Germans reportedly machine-gunned the barracks killing 200 Polish prisoners. The Poles succeeded in killing six of their executioners.

When the Red Army arrived at the camp they found only a few thousand prisoners remaining. They had been too sick to leave.

The capture of Auschwitz comes as the Red Army has made important advances on three fronts: in East Prussia to the north, in western Poland as well as Silesia in eastern Germany. Fighting is continuing around the historic Polish western city of Poznan.

The Polish capital, Warsaw, was liberated a week ago after five-and-a-half years of German occupation.