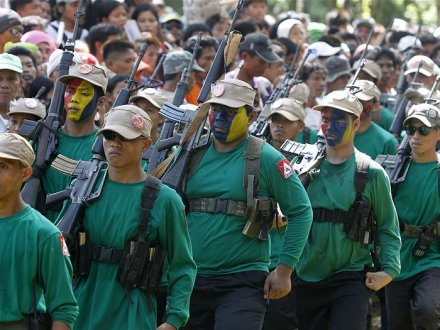 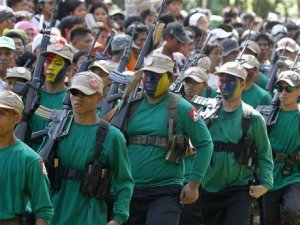 [We wish them well in their fight against imperialism, but do not think they are a true communist organization led by science. And, we think that no good can come of peace treaties with the state – NP]

MANILA, Dec 26 (Reuters) – Maoist-led guerrillas in the Philippines say they are ready to resume peace talks with the government after Pope Francis’ visit to the mainly Catholic state next month, in a renewed bid to end the 45-year conflict.

About 15,000 New People’s Army (NPA) fighters and supporters on Friday gathered in a village on the southern island of Mindanao to support calls for the resumption of peace negotiations by their leaders living in exile in Europe.

“The resumption of formal talks of the panels shall be after the papal visit,” Jose Maria Sison, a university professor and founder of the Communist Party of the Philippines, told a local newspaper in an interview from his base in The Netherlands.

Pope Francis is due to arrive in the Philippines on Jan. 15.

The government cautiously welcomed the rebels’ interest in returning to the negotiating table. “We want to resume talks on the basis of a doable and time-bound agenda,” Teresita Quintos Deles, the president’s adviser on the peace process, told Reuters.

NPA guerrilla leaders operating the mining and plantation areas in Mindanao said they were open to talks but would not lay down their arms and halt an offensive against the military.

“There should be no illusion that the ongoing peace negotiations … will soon lead to comprehensive agreements on social, economic and political problems as basis for a just and lasting peace,” the rebels said in a statement.

The decades-long conflict has killed more than 40,000 people and stunted growth in resource-rich rural areas. (Reporting By Manuel Mogato; Editing by Jeremy Laurence)