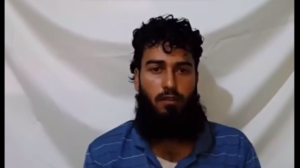 The Times of Israel reports:

“In a video uploaded to YouTube Monday by the Executive Sharia Council in the eastern Daraa Region, an Islamic court established by Al-Nusra in southern Syria, Sharif As-Safouri, the commander of the Free Syrian Army’s Al-Haramein Battalion, admitted to having entered Israel five times to meet with Israeli officers who later provided him with Soviet anti-tank weapons and light arms. Safouri was abducted by the al-Qaeda-affiliated Al-Nusra Front in the Quneitra area, near the Israeli border, on July 22. ” (1)

There is no way to know under what circumstances this confession was made. Confessions of prisoners should be viewed with some skepticism. Even so, it is ironic that the Al-Nusra Front is outing the Free Syrian Army for its collaboration when they and other Sunni Islamists are also collaborating with the imperialists. The reality is that the conflict in Syria is not just a Syrian one. It is a regional proxy war with numerous powers all trying to advance their own interests. The Sunni Islamists themselves, although coming into conflict with the United States, are at the same time have worked for them in the past and currently receive support from indirectly from those same imperialists, usually receiving aid through the Gulf Arab states.