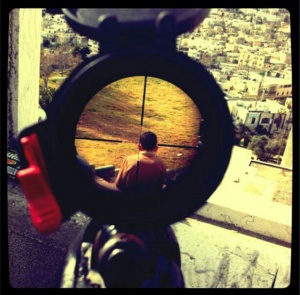 An image is worth a thousand words. An Israeli soldier caused a public outcry when he posted an image of a Palestinian child in the cross hairs of his sniper rifle to Instagram. Such is the brutality of racism, genocide, imperialism. Not only are the imperialists brutal, but they are so arrogant that they don’t even have the common sense to self censor their acts of terror. They are sure that the imperialists have their back so they do not even bother hiding their brutality. Genocide bought and paid by the USA. Israel could not survive without the billions it receives every year in military aid from the USA.