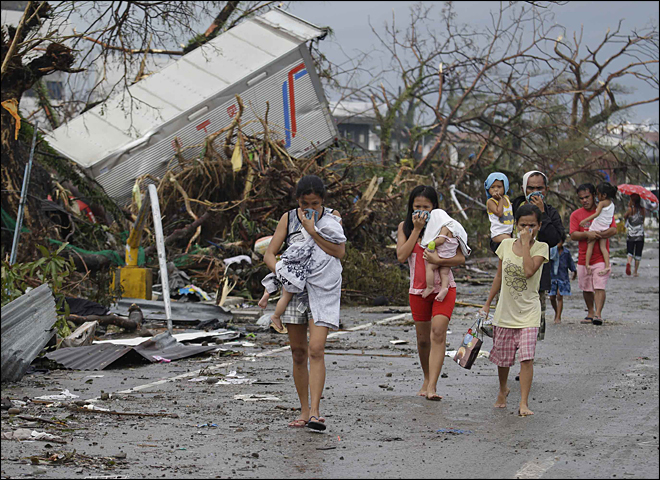 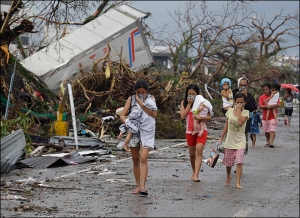 [Why is there so much destruction from these storms in the Philippines? Because capitalism-imperialism has not invested in an infrastructure that protects and serves the people. Centuries of underdevelopment has been foisted on the Filipino masses. Revolution is the solution. –NP]

Manila (AFP) – Tens of thousands of people in the Philippines hunkered down in evacuation centres while three people were reported missing Tuesday as a typhoon pounded its eastern coast amid warnings of giant storm surges and heavy floods.

The eye of Typhoon Rammasun struck Legazpi city in the eastern Bicol region in the early evening, with Manila and other heavily populated regions expecting to be hit on Wednesday afternoon, the state weather service said.

“Roofing sheets are flying off the tops of houses here… the wind is whistling,” Joey Salceda, the governor of Albay province in Bicol said over ABS-CBN television.

He said there had been no reports of deaths while damage to the region — an impoverished farming and fishing region of 5.4 million people — was expected to be “moderate”.

However, Bicol police said three local men were listed as missing off the island of Catanduanes on Tuesday, a day after they pushed out to sea to fish and failed to return.

The Philippines is hit by about 20 major storms a year, many of them deadly. The Southeast Asian archipelago is often the first major landmass to be struck after storm build above the warm Pacific Ocean waters.

In November Super Typhoon Haiyan unleashed giant seven-metre (23-foot) high storm surges that devastated the coasts of the eastern islands of Samar and Leyte, killing up to 7,300 people in one of the nation’s worst ever natural disasters.

The government declared a school holiday for areas in the typhoon’s path, while ferry services were also shut down and dozens of flights cancelled.

“People on the coastal areas are evacuating because of the threat of storm surges,” National Disaster Risk Reduction and Management Council spokeswoman Romina Marasigan told AFP.

More than a thousand Haiyan survivors in Tacloban, a city in Leyte, fled to an indoor government stadium early Tuesday after the weather service warned of the threat of three-metre waves hitting the coast.

“We’re terrified of storm surges,” mother of three Mary Ann Avelino, 26, told AFP as her family sat on the cold concrete of the bleacher seats, watching puddles form on the floor from the leaky roof.

She said her family had temporarily abandoned a lean-to at the ruins of their coastal home to sit out the new typhoon on higher ground.

State weather forecaster Alvin Pura said Rammasun, which is Thai for “God of Thunder”, struck Legazpi, a city of about 185,000 people, with 130 kilometres (81 miles) per hour winds.

It was then forecast to sweep across around 350 kilometres to the northwest and hit Manila and its 12 million people on Wednesday afternoon.

Rammasun is the first typhoon to make landfall since this year’s rainy season began in June, and President Benigno Aquino stressed to civil defence officials in Manila on Tuesday that people in the typhoon’s path must be made to understand the dangers facing them.

“The objective has to be (to) minimise the casualties and the hardship of our people,” he added.

The state weather service upgraded Rammasun overnight Monday from a tropical storm into a typhoon as its wind speeds built up over the Pacific.