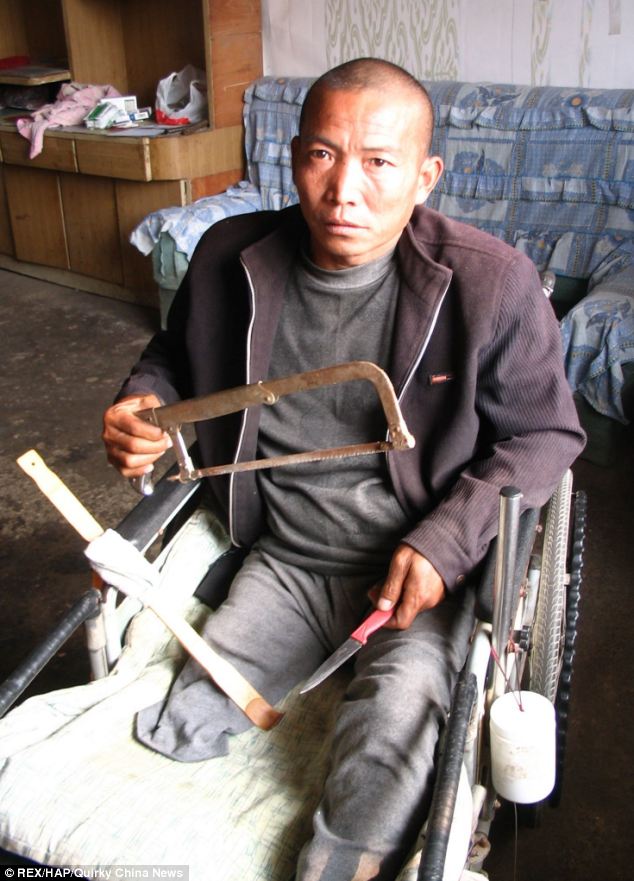 [Capitalism in China reverses the gains of socialist medicine. –NP]

Too poor to pay, Chinese farmer saws off diseased leg

BEIJING – Unable to afford hospital fees to treat or amputate his diseased right leg, one Chinese farmer chose a drastic self-remedy. Clenching a wooden back scratcher between his teeth, Zheng Yanling, 47, took up a hacksaw and a fruit knife, and began to cut.

The home surgery, performed without anesthetic, probably saved Zheng’s life. But his grim operation, done in April 2012 but only revealed in Chinese media this week, has shocked officials and ordinary citizens into offering financial and medical assistance.

His plight has also stirred debate here about stark inequalities in the nation’s healthcare system.

Although the People’s Republic of China is an increasingly prosperous socialist country, dominated by the Communist Party, state subsidies for healthcare, long enjoyed by urban workers, have only recently been partially extended to the countryside, where half of China’s people still live. A serious illness can still bankrupt an average rural family.

Zheng, considered a “tough guy” in his home village Dongzang, in Qingyuan county of north China’s Hebei province, became a hot topic in China’s online media Friday. The man himself, in pain and a wheelchair, received visits from local officials, prompted by the embarrassing coverage of their area.

“They brought gifts but no money,” said Zheng. “I heard that the Baoding City No.2 Hospital may give me free treatment, but I’m not sure, they haven’t confirmed that.”

His troubles began in January 2012, when he felt severe pains in his stomach. Expensive trips to hospitals in Baoding and the Chinese capital Beijing suggested Zheng had contracted a rare disease that produced arterial embolisms on both legs. The arteries on his right leg and below his left knee disappeared, and Zheng was told he had a month to live.

A local doctor refused to perform an amputation. Zheng could not afford further treatment or analysis. Despite government efforts to reduce their burden, farmers still shoulder a large part of medical costs, Yu Shaoxiang, a social security expert, told the Global Times newspaper.

“There are several reasons why some poor people cannot benefit from the system, such as low investment from governments, profit-seeking hospitals and limited reimbursement items,” Yu said.

His money spent, Zheng took action. Fifteen minutes later, when his wife Shen Zhonghong woke from a nightmare in another room, she saw the hacksaw blade broken in two, Zheng’s leg hacked off, and four molars lying on a table, broken loose as he bit down through the pain.

Today, Zheng takes regular painkillers as he battles to save his other leg, after his left foot rotted away with gangrene. The maggots have gone, “but my left leg is still painful every day, I scrub the leg with iodine … then cover the leg with baby diapers to absorb the fester,” he said.

“I wish I could save my left leg. If it has to be cut off, I will keep it somewhere, according to our custom,” he said.

His right leg lies in a jar in his yard, testament to an enduring Chinese belief that one’s body should be whole upon burial, to respect one’s parents. Local official Zhao Yingchun confirmed the basic facts of Zheng’s dramatic experience to the Beijing News newspaper, and said authorities would work towards fitting Zheng with prosthetic limbs.

Online reaction has been firmly in Zheng’s favor.

“Without money, then things must run their course,” wrote Beijing lawyer Xue Huaping on China’s Twitter equivalent, Sina Weibo, Friday. “Our society is ever more developed, but it can’t give our people the most basic guarantees.”

“We have to admire the grassroots, ordinary Chinese have the strong will to survive and endure,” wrote Liu Dianbao, an IT worker in eastern Suzhou city, urging a review of China’s medical insurance system. “I hope this tragedy won’t happen again!”

The Chinese reporter who broke Zheng’s story Thursday has solicited donations to help realize his dream of getting back to farm work.

“Yes, I want to go back to my field, I was good at that. I could also do some handcrafts,” he said. “I wish all poor families could become healthy again with the help of government and medical care, no matter what kind of disease they suffer.”