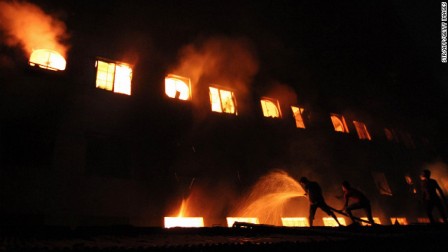 [Bangladesh workers are treated like slaves under capitalism. They work long hours in terrible, dangerous conditions for little pay. They produce for the First World. The answer is revolution. — NP]

DHAKA: Hundreds of Bangladeshi garment workers set fire to their factory on Wednesday to demand a better bonus before the country’s main Muslim festival, police said. Firefighters battled to control the blaze which gutted the warehouse on the ground floor of the factory at Mouchak, 40 km north of Dhaka.

“The workers angrily protested at the amount of bonus they got from the owners for the upcoming Eid Al-Fitr festival,” local police chief Omar Faruq said.

“At one stage they walked out of the factory and set the godown (warehouse), which was on the ground floor of the factory, on fire,” Faruq told AFP from the site.

Protests over poor wages and benefits have hit Bangladesh’s garment industry, the country’s economic mainstay, since April when a factory complex collapsed and killed more than 1,100 people.

The fire, which started at about 2.30 p.m. at the five-storey Libas Textiles factory, was now under control, said a police officer, Sanwar Hossain.

The April disaster highlighted appalling conditions in Bangladesh’s 4,500 garment factories, where workers toil for 10-12 hours a day for basic monthly wages of around $40.

Fearing large-scale protests ahead of Eid Al-Fitr, the government has asked factory owners to pay salaries and bonuses early.

The holiday marking the end of the holy month of Ramadan is due on Aug. 10. About 90 percent of Bangladesh’s 153 million people are Muslims.

According to local media, some factories have told their workers that they might not be able to make payments on time because of shipment delays and non-payment by buyers.