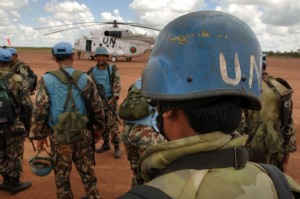 [Nepal’s state army has not only served in Afghanistan with the imperialist forces of occupation, but now they will be serving in Syria with the UN. This would not be particularly noteworthy except that the military of Nepal have been integrating Maoist military forces into their ranks since November 2011. Whatever their nominal mission, the buildup of UN forces in Syria — given the international climate — is not a good thing. It is the kind of thing that communists should be opposing Just because you fl a red flag does not make you a communist. — NP]

Nepal to send peacekeepers to Syria

Kathmandu: Nepal Thursday decided to send Nepali peacekeepers under the UN flag to Syria to help in the establishment of peace and order.

The decision was taken by the council of ministers, Xinhua quoted Minister for Foreign Affairs Madhav Prasad Ghimire as saying.

“We had received a request from the UN to send peace troops to Syria. We gave a nod to the proposal,” Ghimire said. The first batch of Nepali Army personnel, 130 in total, will be deployed in July to be joined again by 130 soldiers in September.

Nepali troops will be a part of the UN Supervision Mission in Syria. The Mission was set up in 2012 in line with the UN Security Council Resolution 2,043.

As of today, more than 100,000 Nepali soldiers have worked in the UN’s international peace missions since 1950s.

3 thoughts on “Nepal to send peacekeepers to Syria”