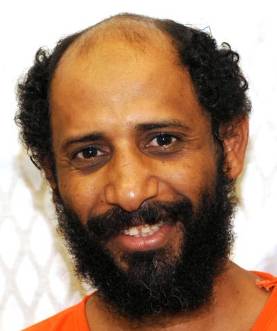 [America has no humanity — NP]

GUANTANAMO BAY NAVAL BASE, Cuba (AP) — For more than three months, the U.S. military has faced off with defiant prisoners on a hunger strike at Guantanamo Bay, strapping down as many as 44 each day to feed them a liquid nutrient mix through a nasal tube to prevent them from starving to death.

The standoff, which prompted President Barack Obama to renew his call to close the detention center, has grown to involve 104 of the 166 prisoners as of Saturday, and may be nearing a crisis point. Yet the experience of a former detainee demonstrates that a hunger strike at Guantanamo can be as indefinite as the open-ended detention that is at the heart of essentially every conflict at the military prison.

The men undergoing forced-feeding aren’t permitted to speak to journalists, but Ahmed Zuhair knows what the experience is like. Until he was released from U.S. custody in 2009, he and another prisoner had the distinction of staging the longest hunger strikes at the prison. Zuhair kept at it for four years in a showdown that at times turned violent.

The military acknowledges a “forced cell extraction team” was repeatedly used to move him when he refused to walk on his own to where striking detainees were fed. He says his nasal passages and back are permanently damaged from the way he was strapped down and fed through a nasogastric tube.

Court papers show that Zuhair once racked up 80 disciplinary infractions in four months, refusing to be force-fed among them, and that he and fellow prisoners smeared themselves with their own feces for five days to keep guards at bay and protest rough treatment.

Zuhair, a former sheep merchant who was never charged with any crime during seven years at Guantanamo, stopped eating in June 2005, and kept up his protest until he was sent home to Saudi Arabia in 2009.

“Not once did the thought occur to me to stop my hunger strike,” he says now. “Not once.”

Zuhair spoke to The Associated Press in a telephone interview along with his lawyer, Ramzi Kassem, a law professor at City University of New York.

The 47-year-old Zuhair lives with his wife and children in the Muslim holy city of Mecca. He said he doesn’t get much news about Guantanamo in Saudi Arabia but that the world should not be surprised that prisoners are back on strike.

“The men there today are going through the same experience and they are suffering just as much, and so they probably will not stop either,” he said.

Since the prison opened in 2002, seven prisoners have committed suicide. It’s the policy of the U.S. Department of Defense to try to keep strikers alive. The feeding procedure is considered safe and its use has been upheld by the courts, said Navy Capt. Robert Durand, a spokesman for the detention center.

The medical personnel who conduct the feedings lubricate the feeding tubes, offer anesthetics to the prisoners and have rules for nasal rest to prevent long-lasting damage, Durand said.

“We think there are adequate safeguards in place to make it as pain-free and comfortable as possible,” he said. “It’s not done to inflict pain and it’s not done as punishment. It’s done to preserve life.”

Officials refer to the process by the medical term “enteral feeding” rather than “force feeding.” It involves restraining men with straps that resemble airplane seatbelts to a specially designed chair that looks like a piece of exercise equipment. Zuhair called it the “torture chair” and said he was left tied down for hours at a time, ostensibly so the liquid nutrient drink Ensure could be digested.

It is difficult to confirm the accounts of either prisoners or military officials. Journalists are not allowed to watch the feeding process or interview the men held behind the perimeter fences and coils of razor wire at this isolated U.S. military base on the southeastern edge of the Cuban coast.

Pardiss Kebriaei, a lawyer with the New York-based Center for Constitutional Rights, recently returned from a visit with clients held at Guantanamo and said several of the men had trouble concentrating, which she attributed in part to being kept isolated in solid-walled cells for most of the day.

She said one prisoner, Sabry Mohammed of Yemen, had lost more than 60 pounds (27 kilograms).

“Sabry Mohammed was a healthy young man before the strike,” Kebriaei said in an email. “It was startling this time to see how much he has changed physically.”

In an editorial published Wednesday in the New England Journal of Medicine, two doctors and a professor of medical ethics urged Guantanamo’s prison doctors to refuse to force feed hunger strikers, saying to do so is a violation of ethical obligations. It’s an argument that has been made for years by human rights groups and detainee advocates.

There are risks to prolonged enteral feeding, including the possibility of getting liquid in the lungs and or damaging the nasal passages, particularly when the person is uncooperative, said Dr. David L. Katz, an internist on the faculty of the Yale University School of Medicine. The effects of prolonged use of liquid nutrition instead of regular food are not really known, he said.

“You do a procedure when it’s the best choice under the circumstances,” Katz said. “In this ethical context, these are people you are forcing to receive sustenance they don’t want. I don’t know how you begin to measure risk-benefit trade-offs, but there are some medical risks, certainly.”

The military began using the restraint chair at Guantanamo to feed prisoners in January 2006 after hunger strikers grew dangerously thin and officials feared some might die. Then, as now, prisoners said they were striking over what they considered the reckless handling of their Qurans by prison staff, conditions at the detention center and their indefinite confinement.

The number of men participating in that protest, which reached 131 at its peak, dwindled to just two — Zuhair and Abdul Rahman Shalabi, a fellow Saudi who remains at the prison and has joined the current hunger strike.

U.S. officials have said the feeding chair was never intended to break the strike, only to keep men alive. The military insists all its procedures are humane.

But Zuhair, and others, have long maintained otherwise. “During each force-feeding, my nose bleeds,” he said in a sworn statement submitted to the court by his lawyer, Kassem. “The pain from each force-feeding is so excruciating that I am unable to sleep at night because of the pain in my throat.”

At one point, the government facilitated a call to the prison from Zuhair’s mother, who urged him to drop the hunger strike. “My family did not know what I was going through at Guantanamo — the humiliation, the torture, the solitary confinement,” he told AP.

A court-ordered April 2009 report by Dr. Emily Keram, a forensic psychiatrist based in Santa Rosa, California, included interviews with guards who denied Zuhair’s allegations that he was roughly forced into the restraint chair and left there much longer than the two-hour maximum.

Keram also found evidence that Zuhair wasn’t always confrontational. Guards told her that Zuhair often served as an intermediary between troops and prisoners.

Guards told her that prisoners would sometimes sing as they were being force-fed, a favorite was hip hop artist Akon’s “Locked Up.”

In his seven years at Guantanamo, Zuhair faced an evolving collection of allegations that he had ties to Islamic extremists, all of which he denied. He had been taken into custody by Pakistani agents in late 2001, and his lawyer says he was tortured into confessing to having met with Osama bin Laden in Afghanistan even though he had never been to that country. He was turned over to U.S. officials and moved to Guantanamo in June 2002.

Kassem pursued a legal challenge and sought to prove that Zuhair was wrongly held. “We just wanted to go to trial and have the hearing so a judge could rule on whether Ahmed’s detention was legal or not,” the lawyer said.

Finally it looked as if they were going to get the chance when the judge set a court date for late June 2009. But just before that could happen, the U.S. put Zuhair on a plane without warning and sent him home, where he went through a rehabilitation program set up by the Saudi government. He was one of the last prisoners allowed to leave before Congress put up roadblocks to releases.

The one-time merchant said he has no work now. And his stomach and back are in constant pain from the effects of his strike.

“I think about the men who are at Guantanamo and I wonder about America’s humanity,” he said. “I ask myself how much longer this will go on.”