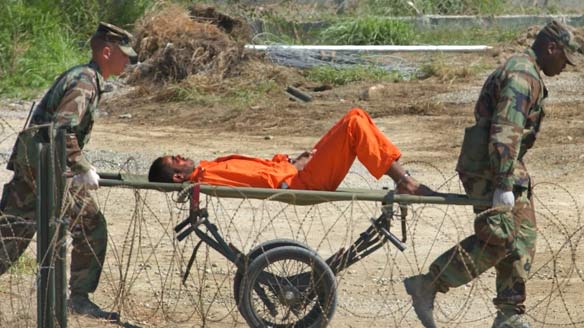 [The United States throws away due process when it suits their interest. –NP]

MIAMI (AP) — The U.S. won’t grant Russia access to one of its citizens held at the Guantanamo Bay prison because the prisoner refuses to meet with the delegation from his government, the State Department said Wednesday.

Russian officials have asked to meet with Ravil Mingazov at the U.S. base in Cuba. State Department spokesman Victoria Nuland said the 47-year-old prisoner refused through his lawyer to see the delegation.

“So we’re not able to facilitate the interview that they requested because we have a longstanding policy of not forcing such interviews if they’re not voluntary,” Nuland told reporters in Washington.

She said the U.S. has offered to host a Russian delegation on a visit to Guantanamo, where the U.S. holds 166 prisoners, but that individuals have a right to refuse visits under international humanitarian law.

Lawyers for Mingazov, a former ballet dancer accused of training with Islamic extremists, said the Department of Justice told them Russian officials wanted to meet with their client.

They were told the delegation would include a representative of the Russian prosecutor general’s office as well as other ministries but the goal of the meeting was not disclosed, said attorney Doug Spaulding.

“In some respects it’s been presented as something akin to a consular visit. They want to see how he is doing and make sure he knows what his status is,” Spaulding said. “And in other respects it seems they want to ask him questions.”

Mingazov, who has been held at Guantanamo for more than a decade without charge, has challenged his detention in court but Spaulding said the prisoner fears what will happen if he is returned to his native country because of the experiences of seven other Russians who were released from the U.S. prison in southeastern Cuba.

“They were subject to persecution upon their release and based on that he does not want to go back,” he said.

Mingazov was a trained ballet dancer who had appeared on national television, according to the New York-based Center for Constitutional Rights. He later converted to Islam and left the country to escape anti-Muslim prejudice, eventually ending up in Afghanistan. U.S. officials have said he was at a terrorist safe house when he was captured in Pakistan in March 2002 and had trained at al-Qaida linked camps.

In May 2010, a federal judge said there was not enough evidence to justify detaining Mingazov and ordered his release. The U.S. government appealed and the case remains pending.