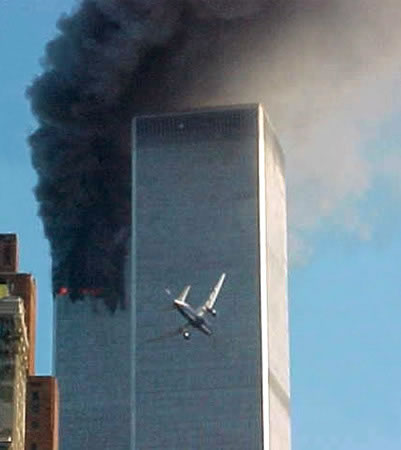 On September 11th, 2001, the United States was dramatically attacked. Both towers of the World Trade Center, a symbol of American economic power, were hit by two passenger jets that were used as missiles. The Pentagon, symbol of American military power, was hit by another. Another passenger plane, presumably to be used as another missile, crashed.  About three thousand people died. The attacks were subsequently used in several ways. They were used to justify the invasion and occupation of Iraq and Afghanistan. They were used to increase the power of  American police and intelligence agencies. They were used by the military-industrial complex and security-industrial complex to justify increased policing, increased budgets, new technologies, etc. They were used to increase surveillance and to squash dissent. The attacks were used to justify increased militarization of the border and attacks on migrants. They were used to terrorize the Islamic and Arab communities in particular. This was all part of a “War on Terror” that was trumpeted by the state, media, and policy makers. This war is endless and open-ended, in some ways paralleling the previous “red scare” and “war on communism” of earlier decades. For those who profit off of wars, the attacks were gifts from heaven. It gave imperialism carte blanche to rampage across the Third World and crush dissent at home.

The USA has waged continuous war against oppressed nations since the beginning. The USA was made possible by what was perhaps the greatest genocide in history. Almost a continent of indigenous civilizations was exterminated to make way for the American way of life. Millions of Blacks and Africans were killed and enslaved. Half of Mexico was stolen. The United States emerged as a truly global empire, appropriating colonies around the world as the other European empires had. After World War 2, with Europe weakened, the USA emerged as the most powerful of the imperialist countries. The USA enforced its economic policies worldwide using bombs, armies, dictatorships, assassinations, and death squads. Tens of millions were killed through military and covert intervention of one kind or another. And many more, billions, were killed by the economic policies themselves: famines, preventable diseases, access to safe water, etc. Capitalism itself is a deadly crisis. The  entire planet is at risk now because of the endless consumption of American way of life. Whenever people fight back against the USA, their countries are bombed, their families assassinated, their lands poisoned. Country after country has been turned into graveyards by the USA. Whenever people offered another model, the USA mobilized all of its might to destroy it. It is no great mystery why people would attack the USA. It is no mystery why people hate the USA. There is no great mystery as to how 911 could have happened. The bigger mystery is why there are not more 911s.

The Leading Light calls for a global people’s war against all exploitation, all injustice, all inequality. Ending the First World, ending imperialism, ending the United States is an important step in the march to Leading Light Communism. The chickens will always come home to roost.