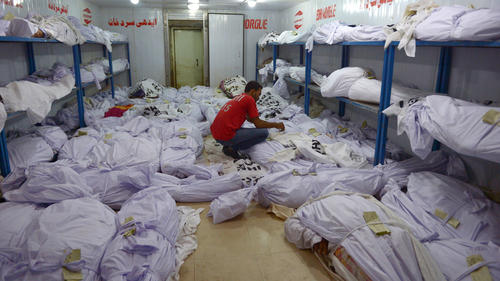 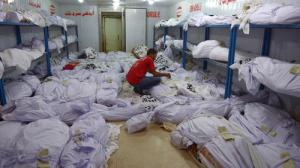 [While global climate change will impact all of humanity, it is clear that those who will suffer the most live in the third world.  Under capitalism, the poor have always been made to suffer for the decadence and gluttony of the rich.  This extreme case is yet another tragic example of how the gross excess and over consumption of the wealthy first world is literally deadly to people in the 3rd world.  Global climate change can not be effectively be managed under capitalism.  Nothing short of total revolution can save the planet and its inhabitants, and the Leading Light will guide the way. -Uziel]

KARACHI (Reuters) – Sea breezes brought lower temperatures on Friday to ease a heat wave that killed more than 1,150 people around Pakistan’s teeming port city of Karachi during the Muslim fasting month of Ramadan.

Mass funerals were held for 50 unidentified victims on Friday before their bodies were hastily buried.

The extreme heat of up to 44 degrees Celsius (111 Fahrenheit) – the hottest since 1981 – coincided with power failures and triggered sharp criticism of the government’s response in the city of 20 million people.

On Friday, the daily high temperature was about 36 degree Celsius (97 Fahrenheit), according to Dr Mohammad Hanif of the Director National Weather Forecasting Centre.

The power outages left many without fans, water or light at the beginning of Ramadan, when many Muslims do not eat or drink during daylight hours.

“By Friday, at least 1,150 people have died in the government-run hospitals,” said Anwar Kazmi of the Edhi Foundation, a private charity that runs a network of ambulances and morgues.

The stench of rotting corpses pervaded one of those morgues on Friday as workers offered funeral prayers for 50 victims.

Afterwards, workers removed the bodies from a hallway so full it was hard to walk through and then piled them into ambulances to be taken to a graveyard.

“We waited for three days for any claimants to come forward, and now we are going to bury the 50 bodies,” Edhi’s Amanullah Khan told Reuters, adding that some of the victims appeared to be homeless.

“Before we bury them, we take photographs and issue tag numbers in case any claimants turn up later and can identify the body.”

The crisis – following a heat wave in India last month that killed about 2,500 people – illustrates how ill-prepared many developing nations are for the extreme weather conditions that scientists say will accompany global climate change in coming decades.

“These type of events are taking place across the world … we need to prepare ourselves and develop our strategy,” said Qamar uz Zaman Chaudhry, the Islamabad-based special adviser for Asia to the UN-World Meteorological Organization.

“It’s time to learn lessons, instead of getting into the blame game.”

Pakistan’s national and local political parties have blamed one another for the crisis, while much of the relief was provided by the powerful military and private charities such as the Edhi Foundation.