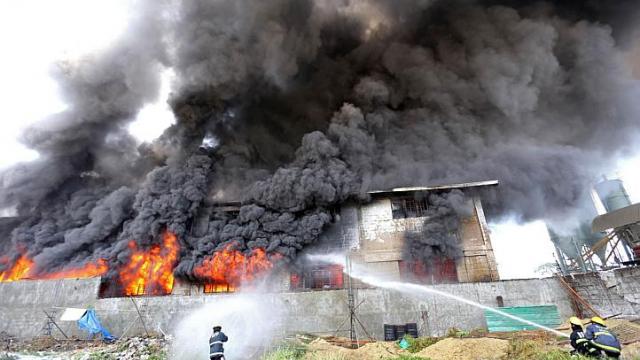 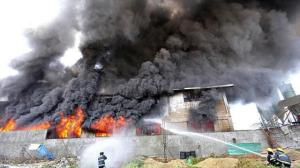 [These third world workers are literally burned to death for low-priced beach footwear. These types of fires are unfortunately common in the Philippines (and many other third world factories) due to a myriad of conditions including lax safety standards and poor construction. Capitalism only cares about profit, not people. There is a future where the conditions that lead to these tragedies are a distant memory. Leading Light Communism will guide us to that future. -Uziel]

MANILA (Reuters) – A fire at a Philippine rubber slipper factory killed 31 workers on Wednesday and dozens were missing and feared dead, government and fire officials said.

Ariel Barayuga, head of bureau of fire protection, said investigators were trying to determine the cause of fire in the capital, Manila, that trapped workers at the two-storey factory building of Kentex Manufacturing Inc, which makes flip-flops and slippers.

A fireman who gave his name as Soriano said 31 bodies had been found, adding most of the victims had died of suffocation.

“There could be more buried under debris,” he said.

“There was someone who was welding at the main entrance and suddenly there was an explosion. It was really fast.”

He said there were flammable materials and chemicals that helped spread the flames.

About 200 to 300 people worked in the factory, according to Veato Ang, the factory owner. “It just broke out and people started running,” he said.

Thirty-nine workers had been accounted for, but 65 were reported missing and feared dead. Portions of the wall and roof on the second floor also collapsed and hit some of the workers.

“I have been informed that 65 people could not be located and might be inside that building,” Mayor Rex Gatchalian told journalists. “I was told no one survived inside, but I am still hoping some of those trapped were able to escape the building safely.”

About 150 people died in the worst fire in Manila which broke out at a popular disco in 1996.

“We were all confused because almost everybody was panicking,” Jun Panalo, a worker who jumped from the second floor, told reporters.

“I jumped out, and then someone followed me. I jumped through the fire. My hair was burned.”