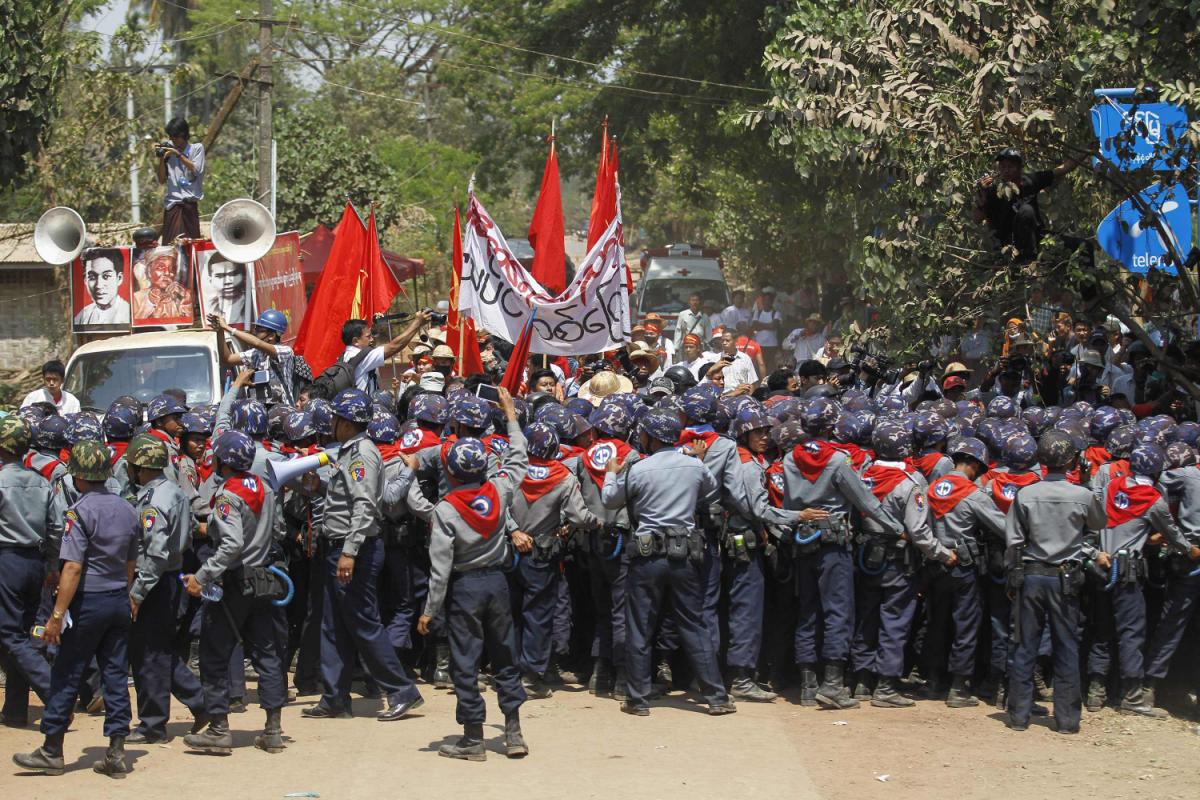 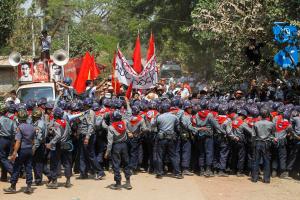 [We are inspired by the brave actions of our Leading Light Comrades in concert with the People of Myanmar against their oppressive state.  Keep up the struggle.  Through Leading Light Communism, we will be victorious. -Uziel]

LETPADAN, Myanmar (Reuters) – – Myanmar police beat students, monks and journalists with batons on Tuesday as they dispersed a protest over a proposed new education law after a standoff that lasted more than a week, drawing condemnation from the United States and Europe.

About 100 people were detained.

More than 200 students and supporters have been protesting an education bill they say stifles academic independence. They had planned to walk from the central city of Mandalay to the commercial hub of Yangon, but were blocked by police in Letpadan, about 140 km (90 miles) to the north of Yangon, earlier this month.

Police had said they would allow the students to continue their march on Tuesday, but that agreement fell apart. Riot police charged at the students and their supporters, chasing some into a monastery, a Reuters witness said.

Protesters and police used slingshots against each other, the witness said.

Yangon has been the site of numerous student-led demonstrations, including those in 1988 that sparked a pro-democracy movement that spread throughout the country before being brutally suppressed by the military government.

A semi-civilian reformist government took power in 2011 after 49 years of military rule, and its response to the current protests has been more muted.

The witness saw about 100 protesters locked in two police trucks after the protest was dispersed, while others fled the town.

The United States, which has backed the reform process in Myanmar, said it was deeply concerned by reports of violence by police and others against peaceful protesters and journalists. State Department spokeswoman Jen Psaki urged the government to respect freedoms of speech and assembly.

The Delegation of the European Union, which has been training the police in crowd management, condemned the crackdown and called for a formal investigation. The British embassy condemned the incident on its official Twitter feed.

The Interim Myanmar Press Council said it was filing a complaint, protesting “in the strongest terms against the arrest of reporters” and calling for their release, without saying how many journalists were detained.

Police and government spokesmen were not available for comment. The Information Ministry posted photos on its Facebook page showing student protesters tearing down police barricades and noted that the protesters removed them “with force”.

Student leaders rejected the suggestion that they had instigated the violence.

“It hurts my heart whenever they do this to us students, but for sure we will never use violence,” said Lin Htet Naing of the All Burma Federation of Student Unions.

Lin Htet Naing’s wife, a former political prisoner of the previous military regime, was among those arrested in Letpadan while he led a brief protest in Yangon on Tuesday.

About 100 protesters were met in the street in Yangon by a larger number of police who grabbed one protester and beat him. Police said they would release him if the protesters dispersed, which they did.