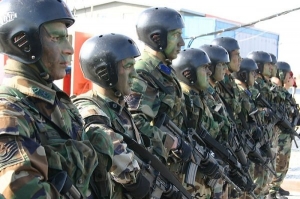 [No way to verify this, but if true it shows a greater level of Western coordination than previously known –NP]

Peoples’ Democratic Party (HDP) MP Demir Celik stated in a press conference in Parliament that the majority of ISIS’ fighting force was formed of around two thousand Turkish Special Force officers, who in the 1990s were cutting off the noses and ears of Kurdish (PKK) fighters.

“Hundreds of years ago states would fight each other but now their subcontracted organisations are fighting on their behalf,” remarked Celik, before adding, “the war in the Middle East is not fate, the war that is being imposed on us by imperialist forces must be put to an end.”

Stating that it was not clear who was friend or foe at a time when all political relationships rested on vested interests and that today’s friend could be tomorrow’s foe, Celik said, “Turkey has taken a side in this dirty and complicated war. The USA has been a spectator to developments in Syria for the past four years and has only intervened at the moment ISIS spun out of control. However Turkey’s silence on the matter has yet to be accounted for. We want to know why Turkey is still silent on this matter. We have received information from reliable sources and this information clearly shows that the developments are contrary to what the AKP government has been telling us.” Celik said:

“It is being said that there are different reasons for the AKP’s silence surrounding the 49 Turkish hostages taken by ISIS from the Turkish Consulate in Mosul in July. At the top of the list of reasons is that the AKP has become involved in secret operations and relations and has engaged in the war in Syria; this is backed up by the trucks that were upheld following the December operations (by the Gulen Movement against the AKP) and contained military equipment and arms, which were on there way to Syria. The group being presented to us as ISIS is not just formed of jihadist militants. We have information that the majority of ISIS’s fighting forces are formed of Turkish Special Forces who were cutting off the ears and noses of Kurdish fighters in the 1990s. These Special Forces have been staying in hotels and safe houses in Mosul for months and have travelled from Mosul to Makhmour, from Makhmour to Sinjar and are in Kobane now commanding and determining the strategy of ISIS. There are said to be around two thousand of them.

We all know of the train-line between Turkey and Syria. Our sources have told us that these Turkish Special Forces are being provided tanks, artillery and missiles through this train-line. The real reason for Turkey not joining the coalition against ISIS is that the Turkish state wants to prevent and stop the revolution in Rojava (Northern Syria); even though they might seem willing to resolve the Kurdish issue democratically within Turkey, the Turkish state’s real intention is to resolve it militarily.”

* Information in brackets was added to clarify the content of the piece and belongs to Kurdish Question. 20.09.2014