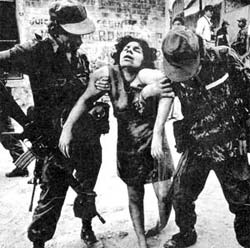 [Death squads are still active in El Salvador. During the civil war there, the United States created a death squad state that butchered the masses there — NP]

The Probusqueda Association for Missing Children has received nearly 1,000 complaints about children separated from their families during the U.S.-backed 1980-1992 war between the Salvadoran government and leftist guerrillas. It says it has helped at least 235 of them, many adopted in the United States or Europe, locate their birth parents.

“This is clear sabotage on our work,” said director Ester Alvarenga, adding that she had not yet been allowed to enter the offices after the fire. “We don’t know what documents they destroyed or took, but this is an attack against our work.”

Official human rights prosecutor David Morales suggested the attack could be related to an appeal before the country’s Supreme Court that would eliminate the amnesty of people who committed grave war crimes, and he asked the attorney general to make a priority of investigating the attack.

“They have the responsibility to look at the possibility that this was a politically motivated attack intending to intimidate Probusqueda because of their work in defending human rights,” Morales said.

Probusqueda said early this year that it has documented at least a dozen cases of children stolen by members the Salvadoran military during the civil war. Some were sold or given away for adoption, or raised by the men who took them. Efforts to investigate those cases have been hindered by the military’s refusal to turn over DNA records

In most of the agency’s cases, children were separated from their families during the confusion of war and were turned over to the Red Cross in the belief their parents were among the 75,000 people who died in the conflict. Such children were placed in shelters and offered for adoption, mostly to families in the United States and Europe.