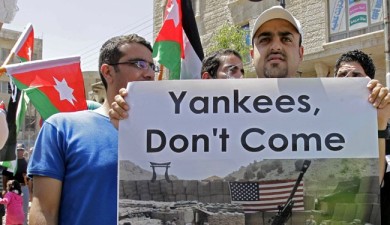 The Jordanian government has proposed to parliament, currently in recess, a bill restricting the jurisdiction of the military State Security Court over civilians to four categories of offences: terrorism, treason, currency counterfeiting and drugs.

But the New York-based HRW called on legislators to “narrow the overly broad definition of terrorism to make the new restriction meaningful.”

“Jordan’s move to limit civilian trials before military courts is good, but it needs to call a halt to trying peaceful protesters for terrorism,” said Joe Stork, acting Middle East director at HRW.

“Jordan should overhaul its outdated penal code and stop dragging civilians in front of the State Security Court just for demonstrating for reform.”

The government has said the proposal, which requires approval by parliament and the king to become law, seeks to bring the tribunal into compliance with the constitution, which prevents civilians from facing military trial except for the four categories of charges.

The US-based group described article 149 on terrorism — which includes “undermining the political regime” and “inciting resistance” to the government — as “vaguely worded.”

Around 11 activists have arrested during the demonstrations.

“Prosecutors of the State Security Court have increasingly pursued cases against largely peaceful protesters on these grounds,” HRW said, saying the government should release and drop charges against all protesters facing trial before the security court.

The State Security Court,established in 1959, has jurisdiction over crimes deemed harmful to Jordan’s internal and external security.

The army chief appoints the military court’s judges, while prosecutors are all military officers.

“Jordan’s promises to stop sending civilians for trial before the State Security Court for speech-related crimes ring hollow when they won’t even put a moratorium on the practice while revising the law,” Stork said.