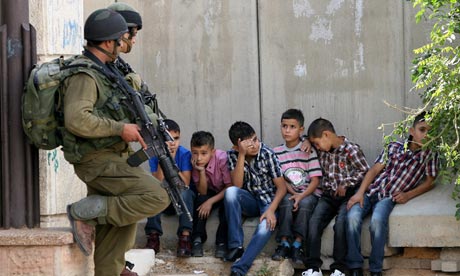 [Another day in Palestine.. more land theft by a racist society supported by the USA — NP]

HEBRON, West Bank (AP) — Israeli settlers have pitched a hut outside a contested house in the West Bank city of Hebron in a new claim to ownership.

Several hundred settlers live in the tense city of 170,000 Palestinians, who view each new settler bridgehead with alarm.

Wrangling over the house took a decisive turn this week when Israeli Prime Minister Benjamin Netanyahu, responding to the fatal shooting of an Israeli soldier in Hebron, said settlers should be allowed into the house.

Nearby, Israeli soldiers fired stun grenades and rubber bullets at Palestinian stone throwers, a routine clash at times of tension.