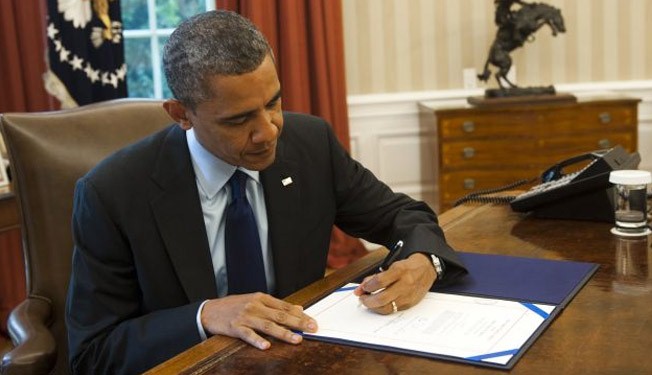 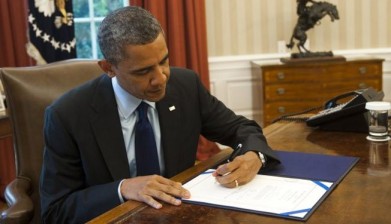 [The United States has more nuclear weapons than any other country. It is the only country to have actually used them on people, killing hundreds of thousands. The United States props up the racist Israeli state, which is one the most heavily armed state in the Middle East, arms used to terrorize the Palestinians and their neighbors. Israel has hundreds of nuclear weapons threatening the region, especially Iran. This is yet another case of imperial hypocrisy. Iran pursues peaceful nuclear technology and is threatened by the imperial powers and their agents. At the same time, the imperial powers and their agents prop themselves up with huge nuclear arsenals. Sanctions should be placed by all peace loving peoples on the imperialists and their agents. — NP]

US President Barack Obama on Monday signed an executive order to expand the existing sanctions on Iran.

White House press secretary Jay Carney said, “This new action targets Iran’s currency, the rial, by authorizing the imposition of sanctions on foreign financial institutions that knowingly conduct or facilitate significant transactions for the purchase or sale of the Iranian rial, or that maintain significant accounts outside Iran denominated in the Iranian rial.”

The expanded sanctions also impose a ban on the sale or transfer of goods or services intended for Iran’s auto sector.

The measures had been approved by the US House Committee on Foreign Affairs on May 22.

At the beginning of 2012, the US and the European Union imposed new sanctions on Iran’s oil and financial sectors with the goal of preventing other countries from purchasing Iranian oil and conducting transactions with the Central Bank of Iran.

The illegal US-engineered sanctions were imposed based on the unfounded accusation that Iran is pursuing non-civilian objectives in its nuclear energy program.

Iran rejects the allegation and argues that it has the right to use nuclear technology for peaceful purposes as a committed signatory to the nuclear Non-Proliferation Treaty (NPT) and a member of the International Atomic Energy Agency (IAEA).

The IAEA has conducted numerous inspections of Iran’s nuclear facilities, but has never found any evidence showing that the Iranian nuclear energy program has been diverted to non-civilian purposes.