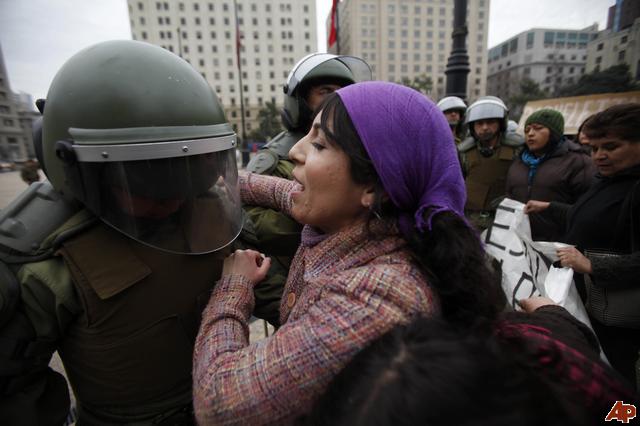 VILCUN, Chile (AP) — The hooded men approached the ranch by night, scattering pamphlets about the death of a Mapuche Indian activist shot in the back by a policeman.

The property belonged to an elderly couple who had lived most of their lives on this wild land surrounded by soaring mountains and rich, primeval forests. For the trespassers, the couple were only the latest in a long line of enemies usurping their ancestral territory.

When the men tried to break in, Werner Luchsinger, 75, shot one of the trespassers in the neck. His wife, Vivian Mackay, 69, desperately telephoned her son for help, as the attackers torched the house. The couple died in the flames.

That deadly arson was a breaking point in some of the most violent months in recent memory in southern Chile’s Araucania region. Over the past five years, reported acts of violence from the Mapuche struggle have escalated 10 times over, prompting a police response that the indigenous group says has been heavy-handed and abusive.

Now, after decades trying to appease Mapuche demands, Chile’s government finds itself at an impasse over how to ease tensions. In the last three years, it has returned 10,000 hectare (25,000 acres) to the Mapuche and encouraged timber companies and other landowners to allow people to till small plots.

Yet the violence has only grown as the Mapuche demand the return of some 400,000 hectares (1 million acres) — about the size of Rhode Island.

“The Luchsinger’s killings marked a before and after,” Andres Chadwick, Chile’s minister of the interior and security, told The Associated Press. “The Mapuche feel oppressed and worried that they’ll all be called terrorists. And the non-Mapuche says, ‘I’m next. They’re going to torch my house.'”

All sides, from the Mapuche to the landowners to timber companies, have lamented the escalating conflict, with many pointing to police overreaction and Mapuche extremists as responsible for most of the destruction.

“We’re the ones paying a high price for something that the state failed to solve in time,” said Jorge Andres Luchsinger, who reached his parents’ house just 10 minutes after his mother’s call. “My parents have already been murdered.”

“Before the murder, there were many other attacks but no one gets caught. So I don’t know what part of the system is failing, but its failure is evident.”

In addition to more land, the Mapuche have called for the expulsion of timber companies they say damage the environment by planting millions of invasive pines and eucalyptus trees to supply European and U.S. markets. They also want an apology from the Chilean government for its alleged mistreatment of the Mapuche, as well as autonomous rule similar to that in the Catalonian region of Spain.

“We’re not trying to kick anybody out,” said Aucan Huilcaman, a Mapuche leader. “We’re not asking for more roads or more seeds. We’re asking for our own government because this is our land. It’s not anti-Chilean, it’s pro-Mapuche.”

For Victor Queipul, his people’s natural right to the territory will ultimately prevail.

“When I was young I used to think, how can we Mapuche ever stand up to the timber companies and the landowners if all the prosecutors and the judges are non-Mapuche,” Queipul said as a police helicopter hovered above the forest. “Then one day, a wise elderly woman told me: There is something like the power of the land. If you believe in that, no one can drive you out.”

President Sebastian Pinera has responded to the tensions by invoking an anti-terrorism law dating back to Gen. Augusto Pinochet’s dictatorship, which lets suspects be held in isolation without charges and permits the use of phone taps and secret witnesses in investigations. Pinera also deployed hundreds of police agents to the region to guard land at risk of militant Mapuche attack.

Chadwick said the violence wasn’t the fault of most Mapuche, but represents “terrorist acts” committed by militant extremists. The targets have included non-Mapuche farmers, timber companies and forestry equipment.

Almost five months after the Luchsinger arson, only one person, Celestino Cordova Transito, 26, has been detained. He was caught on the night of the fire with a shotgun wound to the neck.

“They leave the dogs inside the house and make the owners watch as the house burns down. Who does that?” Chadwick asked. “The Mapuche don’t do this kind of stuff.”

The government crackdown ensnared Daniel Alveal in 2008 when he was arrested and charged in connection with an armed attack against a timber company official. Eventually absolved, he’s now back in his community, where he said he still has a hard time finding a job because of his police record.

“Back then, I was branded as the biggest terrorist in this area,” Alveal said. “Six days later, I was released, but in the public’s opinion, I’m still a terrorist.”

For centuries, many tried to seize the Mapuche’s verdant homeland. The mighty Incan empire failed. The Spanish conquistadors, who founded Chile five centuries ago, crossed the world’s driest desert only to suffer defeat when the expedition’s leader was killed.

The Mapuche ultimately secured treaties with the Chilean state recognizing their land as everything south of the Bio Bio, or roughly the entire southern half of the long, thin country.

But in the late 19th century, a second wave of European settlers arrived, and to make way for them, the treaties were breached in a violent takeover called the “Pacification of the Araucania.”

Today, many of the 800,000 Mapuche live in that region, the country’s poorest, on the fringes of timber lands or ranches.

Celinda Huento, 49, a Mapuche farmer, was sitting on a recent afternoon on a wooden stool in a dirt-floored hut near a barrel she uses to make chicha, a fermented alcohol.

“Things are worse than ever,” Huento said. “What they did with that couple was evil, but the Mapuche are always discriminated against. They trample on our heads.”

Social Development Minister Joaquin Lavin said the government wants to share the traditions and language of the Mapuche with the rest of Chile, pointing to New Zealand’s relationship with its indigenous Maori as a model.

“Whenever there’s a rugby game, the All Blacks team performs the haka,” he said of the traditional Maori dance. “It might seem like a small detail but it’s huge. Every New Zealander knows about it. They also had a big conflict with the Maori, but the country is now proud of its identity.”

On the outskirts of the town of Vilcun, a trail following a stream leads to the charred remains of “Lumahue,” the Luchsinger ranch. Alejandro Nunez, 62, the couple’s gardener, drove by slowly in a red tractor, stopping to pick through the remnants of the family home.

A ripped Chilean flag hanging from the lintel, an altar of melted candles at the doorstep and the blackened coils of the couple’s box spring served as muted testimony to the atrocity.

“It was terribly painful. When they told me that my bosses were burned, I broke down,” said Nunez, pointing to the charred remains of the bed near where he said the couple had died. A granddaughter had placed a dried-out red rose beside the ashes.

“It’s such cruelty,” Nunez said. “They could have burned the house, but why do it while they were inside?”

The Luchsinger family originally emigrated from Switzerland, when Melchor Luchsinger, Jorge Andres’ grandfather, bought about 300 hectares (740 acres) in the region in 1940.

About three decades later, Werner Luchsinger bought some land from his father, split it with his siblings and opened a dairy store. Even in his last days, Luchsinger, a veterinarian, would wake up at dawn to care for the cows and sheep on the ranch. But with small radical groups of Mapuche burning nearby homes, he began locking up his ranch before the sun set.

“We’re victims because my dad bought 40 acres and a home, and that’s where they killed him,” said son Jorge Andres Luchsinger. “So he’s guilty of what? Of buying from a non-Mapuche? … We’re not the cause of this injustice.”

After Chile returned to democracy in 1990, governments did buy land from timber companies and turn the plots over to the Mapuche, while brokering deals to let communities grow crops elsewhere.

Yet the Mapuche often lacked the money or tools to develop the returned land, and they’ve struggled to prove exactly what belongs to them.

Frustrated Mapuche activists took matters into their own hands and began seizing land, with the police response to one action killing 26-year-old activist Matias Catrileo on property owned by one of the Luchsinger’s relatives.

Catrileo’s death remains a rallying cry: His name was printed on the pamphlets scattered at the Luchsinger ranch during the arson attack, which marked the fifth anniverary of his killing. Police have also been accused of shooting rubber bullets and tear gas while storming Mapuche homes.

“About 80 percent of Araucania’s population is non-Mapuche, so the question is what do you do with most of the people?” said Erich Baumann, governor of Malleco, one of two provinces that make up Araucania. “We can’t kick them out, and for good or bad, we can’t go back in history.”