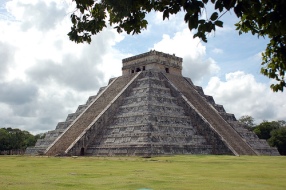 IZAMAL, Mexico  – Thousands of mystics, New Age dreamers and fans of pre-Hispanic culture have been drawn to Mexico in hopes of witnessing great things when the day in an old Maya calendar dubbed “the end of the world” dawns on Friday.

But many of today’s ethnic Maya cannot understand the fuss. Mostly Christian, they have looked on in wonder at the influx of foreign tourists to ancient cities in southern Mexico and Central America whose heyday passed hundreds of years ago.

For students of ancient Mesoamerican time-keeping, December 21, 2012 marks the end of a 5,125-year cycle in the Maya Long Calendar, an event one leading U.S. scholar said in the 1960s could be interpreted as a kind of Armageddon for the Maya.

Academics and astronomers say too much weight was given to the words and have sought to allay fears the end is nigh.

But over the past few decades, fed by popular culture, Friday became seen by some western followers of alternative religions as a day on which momentous change could occur.

“It’s a psychosis, a fad,” said psychologist Vera Rodriguez, 29, a Mexican of Maya descent living in Izamal, Yucatan state, near the center of the 2012 festivities, the site of Chichen Itza. “I think it’s bad for our society and our culture.”

Behind Rodriguez, her two children played in a living room decorated with Christmas trees and Santa Claus figurines.

Mexico’s government forecast around 50 million tourists from home and abroad would visit southern Mexico in 2012. Up to 200,000 are expected to descend on Chichen Itza on Friday.

“It’s a date for doing business, but for me it’s just like any other day,” said drinks vendor Julian Nohuicab, 34, an ethnic Maya working in the ruins of the ancient city of Coba in Quintana Roo state, not far from the beach resort of Cancun.

Watching busloads of white-haired pensioners and dreadlocked backpackers pile into their heartland, Maya old and young roll their eyes at the suggestion the world will end.

“We don’t believe it,” said Socorro Poot, 41, a housewife and mother of three in Holca, a village about 25 miles from Chichen Itza. “Nobody knows the day and the hour. Only God knows.”

Tracing its origins to the end of the 4th millennium BC, the ancient Mesoamerican civilization of the Maya reached its peak between A.D. 250 and 900 when they ruled over large swathes of southern Mexico, Guatemala, Honduras and Belize.

Famed for developing hieroglyphic writing and an advanced astronomical system, the Maya then began a slow decline, but pockets of the civilization continued to flourish until they were finally subjugated by the Spanish in the 17th century.

Today, ethnic Maya are believed to number at least 7 million in Mexico, Guatemala and other parts of Central America.

The vast majority are nominally Roman Catholics, though many still uphold elements and rites of their old beliefs. According to a 2000 Mexican census, there were also a few hundred Jews and handful of Buddhists among the Maya.

Tales of human sacrifice, pioneering architectural feats and an interest in the stars burnished the Maya’s supernatural reputation. So too, say experts, has the misguided notion that the Maya died out with the arrival of the conquistadors.

The reality is that many Maya live in rural areas where water can be scarce, communications poor and education patchy.

Even as some shrug their shoulders at the awe and reverence December 21 has inspired, others worry it has become a free meal ticket for sharp-witted businessmen.

“There’s the legend and there’s the reality,” said Yolanda Cornelio, 21, a tourism official in the city of Merida, whose mother speaks Maya at home. “Some people take the legend and abuse it, using it to make money. There’s a lot of con artists.”

With scores of old Maya ruins, temples and monuments dotting the landscape between southern Mexico and Central America, locals have plenty of opportunities to impress foreign visitors.

One of the most popular attractions lies in a leafy grove near the crumbling pyramids of Coba, where a large stone tablet records the Maya creation date of August 13, 3114 BC – quite literally the cornerstone of the 2012 phenomenon.

“This is a very powerful, sacred place,” said Jonathan Ellerby, 39, a writer from Canada. “I feel something energetic, emotional, and I feel I’m in the right place. I really do.”