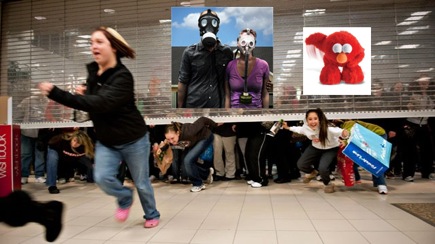 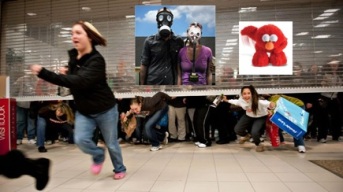 Black Friday is described by Wiki:

“Black Friday is the day following Thanksgiving Day in the United States, traditionally the beginning of the Christmas shopping season. On this day, most major retailers open extremely early and offer promotional sales to kick off the holiday shopping season, similar to Boxing Day sales in many Commonwealth Nations. Black Friday is not an official holiday, but many non-retail employers also observe this day as a holiday along with Thanksgiving, giving their employees the day off, thereby increasing the number of potential shoppers. It has routinely been the busiest shopping day of the year since 2005,[1] although news reports, which at that time were inaccurate,[2] have described it as the busiest shopping day of the year for a much longer period of time.”

Black Friday vividly brings out the contrast between the First and Third World. All over the United States, consumers trample each other to purchase the latest fashions, gadgets, toys, etc. There is not a major city in the United States that does not experiences scenes such as these on the first Friday following so-called “Thanksgiving”: 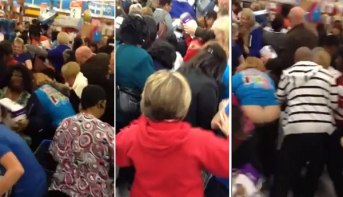 When First World people riot, it is often to preserve and protect their First World status, to protect their imperial privilege. Sometimes it is to protect their right to drink beer in college frat houses. Sometimes it is to attack nationally oppressed communities. On rare occasions, they riot for legitimate issues, such as civil rights, prisoners’ rights, or to opposing police brutality. On Black Friday, Americans riot to acquire the latest fashions, gadgets and toys. Third World peoples, by contrast, riot for basic necessities such as food.

These consumerist riots occurred the same week that over 100 people died and many more injured in a Bangladesh garment factory. While people in Bangladesh literally die producing the latest fashions for Americans, Americans trample each other in a greedy attempt to be the most stylish and up-to-date on Black Friday.