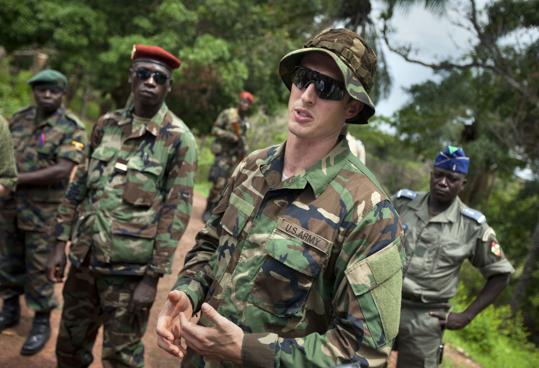 [Not long ago, there was a big internet campaign to “Get (Joseph) Kony,” a mostly inactive Ugandan warlord. The campaign was slick and hip, utilizing many symbols of counter-culture and rebellion. A non-transparent, for-profit entity called “Invisible Children, Inc.” was the main face of the organized effort. The real intention of the effort was not saving child soldiers, but getting access to Uganda’s resources and extending the United State’s role in Africa. Kony was an easy target. All seemed to be going according to plan until the frontman of “Invisible Children, Inc.” was caught without any clothes on, masturbating and cursing in the streets. Cell phones captured the strange incident that quickly sucked the wind out of the campaign. Even so, the United States under Obama’s leadership did send some troops to Uganda. There may be efforts to reinvigorate the campaign under a new brand and frontman, especially as a political diversion. Obama has shown his willingness to use his imperialist forces over and over: Libya, Pakistan, Iraq, Afghanistan, Somalia, etc.  It is a situation where even the US-backed comprador regime in Uganda does not want US involvement. Obama is no friend of Africa. As always, we must oppose imperialism whenever it rears its ugly head. We should also remember how successful the original anti-Kony campaign was in terms of generating grassroots and online support within the United States.  — New Power]

Group: US troops should actively hunt for Kony By RODNEY MUHUMUZA

The American troops play only an advisory role and are not involved in combat operations against the rebels. Uganda leads about 2,500 African Union troops in the hunt for Kony, whose LRA rebels are accused of mass murder and of recruiting children to become soldiers or sex slaves.

“The Ugandan soldiers on the ground in central Africa remain behind in their chase for the LRA rebels, who continuously manage to escape and hide from the trekking teams because of their fast pace and ability to live off the land,” the report says. “Despite U.S.-provided air mobility, the difficult operating environment forces the Ugandan forces to spend unnecessary resources on logistics and transport, rather than on operations aimed at the rebels.”

Daniel Travis, a spokesman for the U.S. Embassy in Kampala, said the U.S. has spent $30 million every year since 2008 on the LRA mission, including on supplies such as fuel for helicopters. He said the Ugandans are best placed to lead the hunt for Kony.

“They are the experts,” he said of Ugandan troops. “They are the ones who have been chasing Kony for a long time.”

Ugandan army spokesman Col. Felix Kulayigye said only Uganda and South Sudan have contributed soldiers toward a proposed force of 5,000 African Union troops. Congo and the Central African Republic have not yet contributed foot soldiers, he said. He disagreed with the recommendation that the U.S. become more involved.

“I am not against it, but this is not a war for the Americans,” Kulayigye said. “It’s not feasible.”

Kony, whose rebellion originated in Uganda before spreading to other parts of Central Africa, was indicted by the International Criminal Court in 2005 for war crimes and crimes against humanity. The LRA, which used to have several thousand men, is now seriously degraded and scattered in small numbers in Congo, South Sudan, and the central African Republic. Only about 200 LRA rebels are still active in the jungle, according to the Ugandan military, but they can conduct hit-and-run operations that terrorize villagers and move across the region’s porous borders in small groups that are hard to detect in dense jungle.

The Ugandan forces sometimes go without food for several days, the report says. Kulayigye acknowledged that the troops lack food when bad weather makes it impossible for helicopters to carry supplies.

Last year Kony became the focus of international attention after the advocacy group Invisible Children released a popular online video highlighting LRA crimes and calling for Kony to be stopped from recruiting children. Ugandan officials believe Kony may be hiding somewhere in the Central African Republic, but have not pinpointed the site.