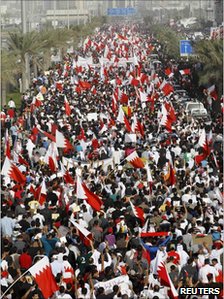 [There has been almost no coverage of the brutal crackdowns by the dictatorship in Bahrain in the mainstream media, especially in the United States. This is because the monarchy there is an ally of the Gulf States and the United States. The majority of the population there are Shia. They are ruled over by a pro-Western, sectarian monarch. — NP]

The clashes broke out in Shiite villages around the capital Manama when hundreds of demonstrators flooded the streets chanting anti-regime slogans and calling on the authorities to release the prisoners, the witnesses said.

It was not immediately clear how many people were wounded in the clashes on Thursday night. The sources said the injured could not be taken to hospital for treatment for fear that police would arrest them.

“With our blood and our souls, we will avenge the martyrs,” sang the demonstrators, some of whom were masked. “Down With Hamad,” they chanted in reference to the Shiite-majority Gulf state’s Sunni ruler, King Hamad.

Demonstrators held up pictures of prominent human rights activist Nabeel Rajab, who was arrested last Saturday for tweets deemed insulting to the government.

On Friday, hundreds of opposition supporters held fresh protests in the Shiite village of Karzakan, southwest of Manama, before dispersing without incident, according to witnesses.

“The people have chosen democracy and will not give up,” their banners read.

“Nabeel Rajab is a prisoner of conscience and he must be immediately and unconditionally released,” said Philip Luther, head of the London-based watchdog’s Middle East and North Africa programme.

Rajab, who heads the Bahrain Centre for Human Rights, was arrested at Manama airport after returning from a trip to Denmark, Sweden and Lebanon.

He is among a number of prominent opposition figures detained by the authorities. Others include leading activist Abdulhadi al-Khawaja, who has been on hunger strike since February.

Khawaja, who has become a symbol of the opposition movement, was arrested in April 2001 shortly after the authorities crushed month-long Shiite protests in a crackdown that killed 35 people, according to an independent inquiry.

Amnesty says in total 60 people have been killed since the protests began in February last year.