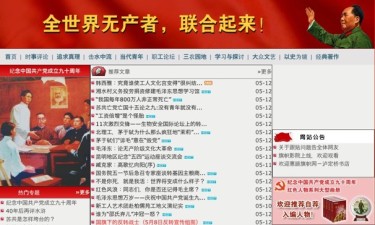 China abandoned its revolutionary principles in the 1970s. China has long since reverted back to capitalism. Recently, the Chinese state has attacked several leftist and Maoist websites in order to quash political dissent. There has been a growing revival of revolutionary ideas in China.  This is yet more evidence that China has long since turned capitalist. Leading Lights support a model of socialism that preserves the right to dissent under most, ordinary circumstances:

“The Web sites Maoflag.net, Jinbushe.org (or “Progress Society”) and wyzxsx.com, the Internet home of Utopia, a neo-Maoist group, were among those closed to Internet users in China. All three have been outspoken in their support of the popular and charismatic former Chongqing Party chief Bo Xilai, who was fired March 15. They were also cheerleaders for Bo’s “Chongqing model” of development, which emphasized a strong state-centered economy and social welfare policies to address income inequality.

The crackdown was the latest step in an ongoing tightening of Internet controls since Bo’s dismissal, as top Party officials seek to contain the public fallout from China’s most serious political crisis in decades. Web search terms have been blocked and other sites shut down, and some of Bo’s past associates have been removed from their posts and placed under investigation.

On Friday, the Maoflag and Utopia Web sites initially carried an identical message saying they had been shut down for a month by the State Council Information Office and the Public Security Bureau for “posting articles and information that are anti-constitution, maliciously attacking national officials, and spreading rumors about 18th Party Congress.” That message was later taken down, replaced by a note saying they were having technical problems.

The 18th Congress, set for this fall, is due to select a new party secretary and president — now slated to be the current vice president, Xi Jinping — and seven of nine new members on the powerful Politburo Standing Committee, which effectively runs the country.

Another leftist site, redchinacn.com, was also closed late Friday, and comments were disabled on the nationalist news site m4.cn, originally known as the “anti-CNN” Web site. In a telephone interview, Rao Jin, the founder of m4.cn, said the site’s bulletin board was being revised to include more lifestyle and entertainment features. He acknowledged, “We do face very big pressure now,” but added, “It’s not convenient to tell you the details.”

On the opposite side of the political spectrum, the Chinese-language Web site of China Elections and Governance, which is run by the Carter Center and advocates political reform, also was inaccessible Friday. A notice said the site was experiencing technical problems.

“The party doesn’t want too much noise before the 18th Party Congress,” said Chen Yongmiao, an independent political observer in Beijing. “The rightists want political reform. The leftists want social welfare” and a more equitable distribution of wealth. “The party just wants the two sides to be quiet and stop talking about politics.”

Until his ignominious firing last month, Bo — the son of revolutionary hero Bo Yibo — was widely considered to be in line for one of the nine Standing Committee positions. His removal has not been officially explained, leaving an information vacuum that is being filled with Internet-fueled rumors, including unsubstantiated claims that he is under investigation for corruption or that his popular following unnerved a leadership that favors faceless, collective decision-making.”